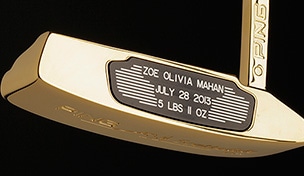 When Hunter Mahan withdrew from the RBC Canadian Open last month with the 36-hole lead because his wife went into labor, he received mostly positive feedback from fans, members of the media and other Tour players. Eventual champion Brandt Snedeker even said he'd be getting the Mahan's a 'very nice baby gift.'

While we don't know what Snedeker ended up getting the happy couple, Ping may have one-upped him on Wednesday when they presented Mahan with a gold-plated putter, inscribed with his daughter Zoe's name, birthdate and vital statistics.

“We’ll never know if Hunter would have held on to win that week,” said Ping Chairman and CEO John Solheim. “But the circumstances were so unique, we wanted to create a lasting memory for Hunter, Kandi and Zoe that would forever remind them of that special day. The birth of a child is a win any way you look at it, so we thought we’d have some fun with it.”

Starting in the 1970's, Ping began to issuing gold putters to tournament winners who used their flatsticks en route to victory, making two replica versions: one for the champion and one to keep in their 'Gold Putter Vault.' They kept with this tradition for Mahan, constructing two gold-plated Scottsdale TR Anser2 putters, giving one to the proud new parents and one to add to their collection of more than 2,800.

'That is really cool and above and beyond,” said Mahan, who is at The Barclays, preparing for the first event in the FedExCup Playoffs. “I really appreciate this.'