'Step up' your game with Mizuno irons 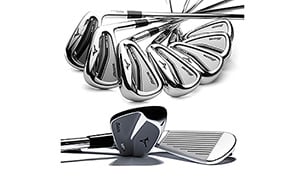 Whenever the folks at Mizuno develop a new product, they produce a so-called concept sheet in an effort to get to the essence of the club. In the case of the new M-4 irons, that word is “pure.” As in being a “pure” players club with “a pure muscle design.”

With regards to the recently released MP-54, the theme is “step up.” As in a “STEP-Muscle” design, and also in being something serious golfers can use to “step up” their games and put a better-player iron in their bags.

According to Chuck Couch, vice president of product management for Mizuno’s golf division, the MP-4s utilize a balanced geometric design that keeps the thickness behind the impact area to deliver a crisp, solid feel.

Made of 1025E Pure Select mild carbon steel, the M-4 irons also employ the company’s patented Grain Flow forging process as well as other proven Mizuno advances, including Harmonic Impact Technology for precise control of vibration frequencies at the point of impact. The clubs come with a finish made of nickel chrome plating.

As for the MP-54s, they are a cavity-backed product also made of mild carbon steel that boasts a milled STEP muscle in the 3- through 7-irons. Couch says that design repositions weight to the cavity frame to increase stability on off-center hits as it also creates a deeper center of gravity for launch forgiveness.

At the same time, it allows the equipment maker to maintain necessary thickness behind the ball to deliver that solid feel at impact. Moving to the scoring irons, 8 through pitching wedge, the MP-54s feature a Solid Muscle Design for enhanced feel and maneuverability. All of the irons in this line are made to give the appearance of a thin top line at address as well as to provide the versatility of a thin sole for better playability.