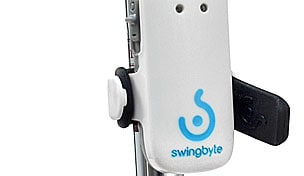 After toiling for a number of years on various worldwide golf tours, journeyman professional Brian Payne decided to make a career change. And to make that change, he determined he needed to go back to school. So he applied to, and was accepted at, the University of Chicago’s Booth School of Business. Not long after that, he attended an orientation night at the prestigious college.

“We had a sort of speed networking session, during which I met a young, Ukrainian-born software architect named Alex Pedenko,” recalls Payne, 38. “He had been working with military aerial drone technology and had an idea of how he could use that to track motion in sport. Alex was not a golfer, but he thought the sport was the perfect place to apply his ideas. So, we got to talking.”

Talk they did, and the result of their conversations – and a great deal of work arising from them – was the development of a wireless, three-dimensional swing analyzer called Swingbyte. Unveiled at the 2012 PGA Merchandise Show in Orlando, Fla., it is a device, 1x2 inches in size and weighing less than one ounce, that fits on the shaft of a golf club and transmits a digitized version of a golf swing, along with key data, to a smartphone or tablet.

Swingbyte uses a sensor, an advanced mathematical algorithm and Bluetooth connectivity to do that, communicating in real time key swing metrics, including clubhead speed, swing path and impact angles.

According to Payne, the product offers a way for golfers of all abilities to break down their own swings, using the communication devices that have become so much a part of their lives, and also to work with professional instructors, whether their own or ones who are part of the Swingbyte network.

“Swingbyte is personalized golf instruction for the digital age,” says Payne, who is vice president of business development for the Chicago-based company. “It’s the most objective, convenient and affordable way golfers can learn about their swings and improve their games.”

The introductory price of the Swingbyte unit is $149.