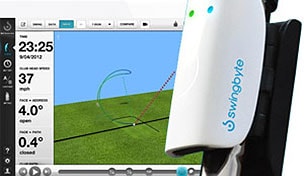 Getty Images
DORAL, FL - MARCH 12: J.B. Holmes hits out of the bunker on the second hole during round two of the 2010 WGC-CA Championship at the TPC Blue Monster at Doral on March 12, 2010 in Doral, Florida. (Photo by Marc Serota/Getty Images)  -

Whenever you run into a question that just kind of stumps you, the answer will inevitably be … there’s an app for that. Thanks to Swingbyte, this now applies to improving your golf game.

It's now possible for everyone to have a personal golf coach in the palm of their hand. Swingbyte, which weighs less than an ounce, easily attaches to any club in your bag (driver through putter) and connects to your smartphone or tablet via Bluetooth and the free Swingbyte app. From there it's simple, just swing away.

• Your club's true plane from address to impact

• Static and dynamic loft and lie at address and impact

• Angle of attack and club path

They knew their product was good, but didn't know how good until the 2012 PGA Show, in which they were named one of the '12 Coolest Items' by Golf Digest.

“We were just three guys in a small booth with no fanfare … but we knew we had something because people’s reaction was ‘Oh my God I didn’t even know something like this existed,’” said Payne.

Swingbyte also saves all of your swing data so you can track your progress and makes it easy to share the info through social media or with your golf buddies and instructor – if you so happen to have one.

“I think this is a valuable tool for anyone. Golf is still very hard with accurate information, but it’s almost impossible if you don’t know what’s going on,” added Payne.

For an in-depth view of how Swingbyte can instantly find the flaws in your game and help improve your swing, check out the video below.

Swingbyte just released their second version of the electronic swing coach – the Swingbyte 2 – which works with both Apple and Android devices and retails for $149. For more information or to make a purchase, visit Swingbyte online.