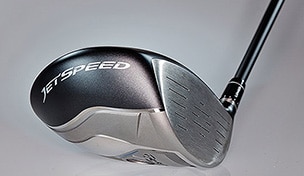 TaylorMade is nothing if not consistent. Just a few weeks after releasing the full SLDR line of woods and a mere 10 months after the launch of their wildly successful Rocketballz Stage 2 driver, fairway woods and hybrids - December will mark the debut of TaylorMade's JetSpeed metalwoods.

While this may seem a bit excessive, according to  TaylorMade executive Sean Toulon, the JetSpeed line was constructed as more of a compliment to the newer SLDRs and represents a "total departure" from the Rocketballz.

The JetSpeed driver ($299) is the first to feature TaylorMade's speed pocket technology, which goes all the way through to the sole of the club head and aims to reduce spin and increase speed and distance, especially on mis-hits. It is also the only club in the line to offer adjustability, a sudden must-have feature on most new drivers.

JetSpeed fairway woods ($229) and hybrids ($199) were built with most of the same design components in mind - including the speed pocket - as the driver, and come in everything from 15- to 28-degree models.

What's next for TaylorMade? A safe bet would be the release of some new clubs in the near future. Stay tuned.