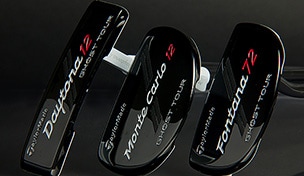 TaylorMade Golf is once again augmenting its putter offerings with the release of a new Ghost Tour Series. It consists of three blade-style models – Daytona 12, Daytona 62 and Sebring 62 – and four mallets – Maranello 81, Fontana 72, Monte Carlo 12 and Corza 72.

Company engineers say the lineup is designed to be aesthetically pleasing because of the detailed design of the individual models while it also appeals to golfers who prefer traditional putter shapes and weighting.

All Ghost Tour Series putters feature a premium black ion plating on the sole as well as a coat of durable white paint on top to provide contrast benefits against the green. Strong black parallel lines on the trailing edge form the first and second read alignment system in an effort to further reinforce accuracy.

Each model from this line, offered in lengths of 33, 34 and 35 inches, boasts a chrome stepless shaft and what TaylorMade technicians call a tour-preferred rubber grip. Golfers also have the option of upgrading to the same shaft in matte black, a finish used by a number of touring pros to help reduce glare.