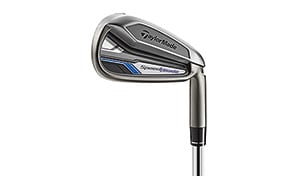 Getty Images
SAN DIEGO - JUNE 14: Tiger Woods (L) celebrates with caddie Steve Williams (R) after holing out from the rough for birdie on the 17th hole during the third round of the 108th U.S. Open at the Torrey Pines Golf Course (South Course) on June 14, 2008 in San Diego, California. (Photo by Donald Miralle/Getty Images)  -

TaylorMade Golf officials say that the new SpeedBlade iron is a cutting-edge game-improvement club designed to launch the ball exceptionally high and far.

They say that the key performance feature in this product is the improved Speed Pocket, a handlebar-shaped slot in the sole of the 3- to 7-irons that enables a large area of the clubface to flex and rebound at impact, resulting in faster ball speeds, higher launches and better feel.

“The Speed Pocket performs where golfers need it most,” says Brian Bazzel, TaylorMade’s director of iron, wedge and putter development. “Our research indicates that 72 percent of shots hit by 5- to 25-handicap golfers are impacted below the center of the clubface.

“That typically results in low-launching shots of inconsistent distance. The Speed Pocket helps you launch those low-impact shots on a consistently higher, longer-carrying and softer-landing flight.”

Bazzel says that in recent years, TaylorMade iron engineers have worked extensively with the equipment maker’s metalwood team to better understand how to incorporate driver design into an iron.

The result of that collaboration, he explains, is SpeedBlade, which employs a Speed Pocket that has not only been widened and lengthened, but also relies on a cut-through slot to provide more flex and rebound on the bottom part of the face.

The new SpeedBlade, which is available in 8-piece sets, employs progressive shaping. The slender topline and sole in the short irons is made to promote better workability, feel and control, while the longer irons boast a bigger topline to inspire confidence at address and utilize a multi-material badge to dampen vibrations.

As for the 50-, 55- and 60-degree wedges in this line, they feature classic tour shapes and blade construction.