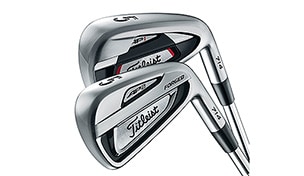 Titleist has a habit of upgrading its club offerings every couple of years, which means it is time this fall for the latest iteration of its AP1 and AP2 irons. Company technicians say these are designed to deliver longer flight with increased forgiveness and a more solid feel.

While part of the same iron family and geared toward serious golfers, the models have slightly different targets. The AP1 is more of a game-improvement product for the aspiring golfer, with a multimaterial, dual-cavity design. But it also has a market at the highest levels of the game, as evidenced by Ben Curtis putting them into his bag this past season.

As for the AP2s, they are multimaterial forged irons, with the better player the primary customer. And they have already made some noise on tour: Jordan Spieth won his first career PGA Tour event, the John Deere Classic, with them, while Jason Dufner used the new AP2s to win the 2013 PGA Championship.

At the same time, the AP1 and AP2 share several features. Advanced center of gravity height progression is designed into both models to create higher-launching long irons and flatter-launching short irons, for greater distance and distance control. Titleist engineers also utilized tungsten weighting and manufacturing technologies to make them more forgiving even as they maintained the head sizes and blade lengths they believe serious golfers prefer.

“There’s a progression in how we design irons,” says Dan Stone, vice president of Titleist golf club research and development. “Since long irons require more speed and are more difficult to hit for most players, we try to maximize the forgiveness. You can design more forgiveness into an iron by simply making the head bigger. But in doing so, we would give up control. So, we pushed the envelope with high-density tungsten in order to maximize the forgiveness while retaining the look that serious golfers want to play.”

Stone says that the progressive center of gravity also improves feel, and adds that both AP models feature a new, pre-worn leading edge to reduce digging at the point of turf entry and increased camber (more in the short irons) that helps control divot depth.