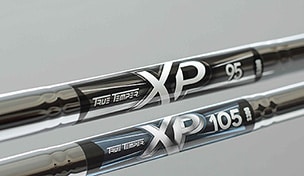 Getty Images
Keegan Bradley hits out of a bunker on the fifth hole during the first round of the Northwestern Mutual World Challenge at Sherwood Country Club on December 5, 2013 in Thousand Oaks, California. (Photo by Stephen Dunn/Getty Images)
-

The realm of superlight steel shafts has a new entrant in the form of the just-introduced XP shaft series from True Temper, which company engineers say is designed to deliver explosive power and distance to every iron in the bag while also promoting forgiveness.

“Every golfer, no matter the skill level, seeks greater distance,” says Scott Hennessy, president and chief operating officer for Memphis-based True Temper Sports. “And that’s what we set out to provide with the XP series. We all know that over time, a golfer is going to be more accurate hitting an 8-iron as opposed to a 6- or 7-iron. And we knew that we could get players consistently closer to the pin if we could give them an additional full club of distance more with their irons.”

According to Hennessy, True Temper combined advanced ultra light alloy development with optimized material distribution to produce a flex chamber in which power is stored during the downswing and released just prior to the point of impact. That’s where the extra distance comes from, and he says that player and robot testing have shown an average of 6-8 yards improvement in carry distance with the new XP series, with many players seeing double-digit yardage increases.

The XP series is offered in two weight options – XP95 (for 95 grams of weight) and XP105 (for 105 grams) – to cover a wide range of player profiles, from the higher handicapper to the single-digit player. Both are available in R300 and S300 flexes.