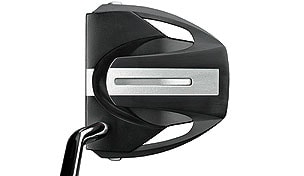 Getty Images
DOHA, QATAR - JANUARY 23: Robert Jan Derksen of The Netherlands hits his tee-shot on the fifth hole during the second round of the Commercialbank Qatar Masters at Doha Golf Club on January 23, 2009 in Doha, Qatar. (Photo by Andrew Redington/Getty Images)  -

Padraig Harrington has been a big Wilson guy for much of his professional career. Except, that is, when it came to his flat stick, which was a Two-Ball putter made by a competing equipment company. But the Irishman has put a new flat stick into play a few times this year.

The Vizor is a mallet-style putter that bears the Wilson Staff logo. While Harrington has yet to switch to it completely, Wilson Golf officials expect the three-time major winner to do so in the not-too-distant future.

“As everyone knows, Padraig has long used a Two-Ball,” says Tim Clarke, general manager for Wilson Golf. “But as we talked with him about golf club development in recent years, he really challenged us to make a putter he would use in competition. In those discussions, he spoke a lot about the importance of the eye-over-the-ball concept and being able to get his eyes in the same position every time he putts.”

The result of those talks, and some serious R&D work at Wilson Golf, is the Vizor. Introduced late last fall and available in 33- and 34-inch length options, the new putter features a soft, urethane face insert for improved touch and feel as well as a face-balanced shaft design. In addition, the stainless steel periphery of the club produces a high MOI (for moment of inertia) to bolster stability and forgiveness. But the most significant characteristic is a visual plane differential alignment that is designed to ensure players’ eyes are ideally positioned over the ball. According to Clarke, that alignment advance helps to increase consistency in proper eye position. The club has a very flat sole, Clarke says, adding that it works best when golfers are able to set the putter up behind the ball, and then take their stance.

“We conducted tests with some 2,000 amateur players and found there was a 40 percent improvement in their getting properly aligned when they used the Vizor putter, and also in developing better and more consistent putting direction,” Clarke says.

No wonder Harrington is thinking of putting it in full-time tournament play.