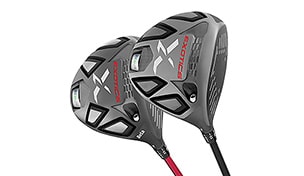 Tour Edge continues to upgrade its XCG line of drivers with the release of the new XCG7. The latest offering from the Batavia, Ill., clubmaker is available in two clubhead sizes, one 460 cc and the other, known as the Beta version, 440 cc, featuring a smaller, refined shape with a deeper face.

Both heads are made of 6A4V titanium. Both have black matte finishes. And they each incorporate adjustability with loft options ranging from 8.5 to 12 degrees in half-degree increments.

Product engineers say they worked hard to maximize distance with these drivers by utilizing a so-called Power Grid. Positioned directly behind the hitting area, it is designed to create an accordion-like effect by flexing at impact and produce a hotter launch as a result.

That performance attribute is enhanced by the use of variable face thickness technology in the clubhead, which offers multiple levels of thickness that are made to encourage that spring-like reaction on more points on the face, especially in the heel and toe areas.

In addition, Tour Edge technicians employed four advanced-position hexahedron weights in the clubheads to bolster moment of inertia and increase stability. Those features also position the center of gravity lower and deeper in the face of the XCG7 for mid spin and a higher launch angle. As for the Beta, the weights there are located higher and closer to the face to promote a more penetrating launch angle, and to minimize spin.

The company also looked to improve stability even more by removing weight from the rear center of the soles of these drivers. The dual-step cavity in the XCG7 is what allows technicians to put extra weighting in the rear heel and toe in that version, while a wider cavity in the Beta model enables the equipment manufacturer to move weight forward there for a higher center of gravity.