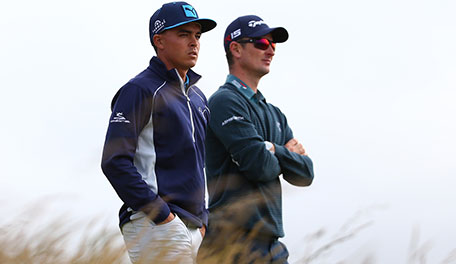 This week marks the 39th event of the 2014-15 PGA Tour season, as 120 players tee it up at the Quicken Loans National. Each week, a panel of experts will offer up their picks from four groups of players, based on Golf Channel's fantasy game, Fantasy Challenge. We will also keep track of their scores and standings. The panel includes: senior writers Rex Hoggard and Randall Mell; editorial director Jay Coffin; associate editor Will Gray; 'Morning Drive' host Gary Williams; host Charlie Rymer and defending fantasy champion Ryan Lavner.

Group 1: Justin Rose: The defending champ continues to impress this season, with a win already under his belt and top-10 finishes at two of the first three majors.

Group 2: Justin Thomas: Thomas is putting together an impressive rookie season, highlighted most recently by a T-5 finish at the John Deere Classic after letting things slip away the prior week at The Greenbrier.

Group 3: Will Wilcox: Wilcox only has conditional status, but he has made the most of it and currently leads the Tour's all-around ranking. Seven top-25 finishes include a runner-up earlier this month in Alabama.

Group 4: Ollie Schniederjans: The former top-ranked amateur impressed last week in his pro debut and is looking to make the most of a handful of sponsor invites to close out the summer.

Group 1: Justin Rose: The defending champion has never played Robert Trent Jones Golf Club, but his form (top-10 finishes in two of his last four starts) suggests that won’t be an issue.

Group 2: Brendon de Jonge: He’s finished well at Tiger’s event in the past (T-8 last year and T-11 in 2012) and normally plays his best golf during the dog days of summer.

Group 3: Greg Owen: The Englishman has always been one of the PGA Tour’s top ballstrikers, but his putting has come around in recent weeks and his confidence is high.

Group 4: Andres Romero: The Argentine has been surprisingly consistent the last month or so with top-15 showings in three of his last five starts, and he needs to make a move in the FedEx Cup standings to secure his spot in the playoffs.