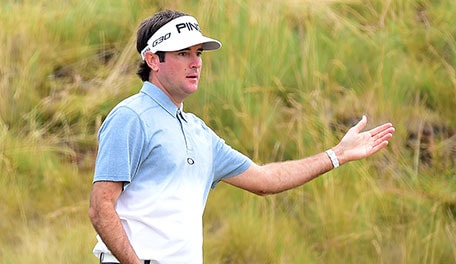 This week marks the 33rd event of the 2014-15 PGA Tour season, as 144 players tee it up at the Travelers Championship. Each week, a panel of experts will offer up their picks from four groups of players, based on Golf Channel's fantasy game, Fantasy Challenge. We will also keep track of their scores and standings. The panel includes: senior writers Rex Hoggard and Randall Mell; editorial director Jay Coffin; associate editor Will Gray; 'Morning Drive' host Gary Williams; host Charlie Rymer and defending fantasy champion Ryan Lavner.

Group 1: Bubba Watson: Watson notched his first win at this event in 2010, and he has added a pair of top-5 finishes since. While Chambers Bay didn't suit his game, TPC River Highlands always has.

Group 2: Russell Knox: The Scot has been playing some quietly consistent golf this season, with nine top-25 results in 20 starts. At ninth on the Tour in GIR percentage this season, he should create plenty of birdie chances.

Group 3: Tony Finau: The long-hitting rookie has found his stride, with a run of five straight top-20 finishes capped by a T-14 result at Chambers Bay. His length off the tee will give him an edge once again this week despite the cozy confines of TPC River Highlands.

Group 4: Chad Campbell: The veteran has been hit-or-miss this season, but he has a strong track record at TPC River Highlands and finished T-8 in Memphis in his most recent start.

Group 1: Patrick Reed: Derailed by a third-round 76 at Chambers Bay, but he is trending in the right direction with seven of his last 12 rounds on the PGA Tour in the 60s.

Group 2: Branden Grace: The South African is no longer a surprise contender in the United States. His tie for fourth at the U.S. Open was his third top-10 finish in his last four Tour starts.

Group 3: Tony Finau: The rookie has been on an impressive run the last month, finishing inside the top 20 in his last five Tour starts including a tie for 14th last week at the U.S. Open.

Group 4: Spencer Levin: Solid in his last two events and he's played well at the Travelers Championship (T-20 in 2005).