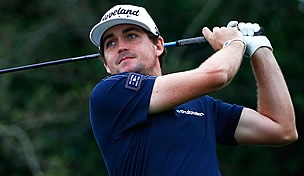 Getty Images
Seventeen-year-old Brooke Henderson won the Portland Classic in August and just a day later, commissioner Mike Whan approved her petition to waive the LPGA's requirement that an LPGA member be 18. Henderson followed in the footsteps of Lydia Ko and Lexi Thompson, who also were awarded membership after winning before their 18th birthdays. Henderson is now exempt through the end of 2016.  -

This week marks the 19th event of the 2013-14 PGA Tour season as the Florida swing concludes in Tampa with the Arnold Palmer Invitational, where 120 players will battle on the home course of "The King." Each week, a panel of experts will offer up their picks from four groups of players, based on Golf Channel's fantasy game, Fantasy Challenge. We will also keep track of their scores and standings. The panel includes: senior writers Rex Hoggard, Randall Mell and Jason Sobel; contributors John Hawkins and John Antonini; editorial director Jay Coffin; 'Morning Drive' host Gary Williams; staff writer Ryan Lavner and defending fantasy champion Charlie Rymer.

Group 1: Justin Rose: The Englishman has a solid record at Bay Hill – he finished runner-up last year and tied for third in 2011 – and a top-10 last week at Innisbrook is a sign he is coming into form.

Group 2: Hunter Mahan: He has become one of the game’s most consistent players and is fresh off top-10 finishes at his last two starts, bookend T-9s at the last two World Golf Championships.

Group 3: Will MacKenzie: Willie Mac is off to his best start ever and he finished tied for fourth last week at Innisbrook and was tied for sixth earlier this month at the Honda Classic.

Group 4: Greg Owen: His runner-up at Bay Hill in 2006 is all at once the pinnacle and pit of his professional career, but the Englishman is still among the game’s best ballstrikers and could be a Sunday surprise.

Group 1: Justin Rose: While the cat's away… I like the solid finish last week at Tampa, and I really like the fact Rose was second at Bay Hill a year ago. He's made eight cuts in nine starts at the Palmer.

Group 2: Keegan Bradley: Although he's stumbled a bit since having his streak of top-20 finishes snapped at Phoenix, Bradley does have good memories of Bay Hill, having finished T-3 in 2013.

Group 3: Pat Perez: Seems like I pick Perez every week. Sooner or later he's going to repay my confidence in him. Perez has made 10 cuts in 11 starts at Bay Hill so he should, at the very least, play the weekend and earn some cash.

Group 4: Chad Campbell: Speaking of making cuts, the 2004 Palmer winner has never missed the cut at Bay Hill in 11 starts (although his win 10 years ago is his only top-10 finish).

Group 1: Graeme McDowell: Fast greens at Bay Hill should play right into the hands of one of the game’s premier fast-greens putters.

Group 2: Keegan Bradley: I’ve been picking Bradley a lot lately, because he’s ready to bust out with a win soon. Let’s hope it’s this week.

Group 3: Pat Perez: Contended into the weekend at Tampa without much prep work beforehand. Expect him to build on that performance.