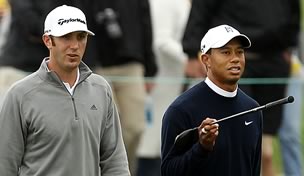 This is another double week for fantasy players! GolfChannel.com experts offer up their fantasy choices below for the AT&T Pebble Beach National Pro-AM, and their selections for the Omega Dubai Desert Classic can be seen here. Each week a panel of experts will offer up their picks from four groups of players based on Golf Channel's new fantasy game, Fantasy Challenge. We will also keep track of their scores and standings. The panel consists of: senior writers Rex Hoggard, Randall Mell and Jason Sobel; contributors John Hawkins and Win McMurry; editorial director Jay Coffin; RotoWorld.com's Rob Bolton; 'Morning Drive' hosts Gary Williams and Erik Kuselias; and Golf Talk Central contributor Ryan Ballengee.

Group 1: Phil Mickelson: It's going to be an interesting week with Tiger rounding back into form as well, but I give Lefty the upper hand to make the most of this week.

Group 2: Bryce Molder: He tied for sixth last year, a finish that should have been better without the disappointing 74 on Sunday. Closed in style with a 66 last week en route to a T-15 finish.

Group 3: Rod Pampling: He enters this week off two top-15s in a row this year. The Australian has only played Pebble once dating back to 2005, but in 2010 he finished T27.

Group 4: James Driscoll: For a player in this final group, he has had a good year with three made cuts, two of them top-30 finishes. He tied for 13th a year ago at Pebble and 14th in 2008.

Group 1: Tiger Woods: This just seems like the week. He's been in the top three in his last starts and, you know, he kind of likes Pebble.

Group 2: D.A. Points: Does anybody respect the defending champion? Points is in great form to start the season.

Group 3: Bob Estes: Estes has started out the year well and can get a big bump in priority with a modest finish this week.

Group 4: Jeff Maggert: Had a great chance at Sony to start his season and is quietly playing some of the most consistent golf on the PGA Tour.

Group 1: Tiger Woods: Don't feel great about any of the names here, so go with the one who played well two weeks ago.

Group 2: Rickie Fowler: At some point, he has to win. Right?

Group 3: Brendan Steele: Name jumped out at me in this group.

Group 4: William McGirt: Just looking for someone to make a cut in this group.

Group 1: Tiger Woods: Forget that balky iron play in Abu Dhabi and a victory schneid that has extended past two years. There are only two numbers that count this week - 15 (Woods' margin of victory at the '00 U.S. Open at Pebble) and 24 (the number of putts he needed on Sunday in Abu Dhabi).

Group 2: Spencer Levin: Your scribe scored big last week going with the rebound pick of Kyle Stanley. It's worth seeing if karma has any more magic left for Levin.

Group 3: Harris English: The rookie has quietly climbed to 42nd in earnings this year and is starting to look like a less-animated version of Webb Simpson.

Group 4: Greg Owen: One of the Tour's best ballstrikers has had limited success at Pebble Beach and the poa annua greens should help mitigate his often-pedestrian putting.

Group 1: Tiger Woods: First opportunity to capitalize on a highly-anticipated return to success.

Group 2: Bryce Molder: Has finished inside the top-15 in six of his last seven starts. Top-10s in his last two starts at Pebble Beach.

Group 4: John Huh: Shared sixth at the Farmers and 12th at the WMPO. It's about time I hopped aboard.

You can watch complete coverage of the AT&T Pebble Beach National Pro-Am Thursday-Friday live on Golf Channel from 3PM-6PM ET.