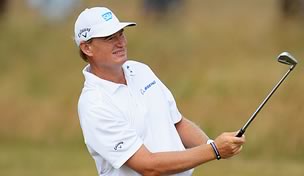 This week marks the third event of the 2013-14 PGA Tour season as Kuala Lumpur Golf and Country Club plays host to the CIMB Classic. Each week, a panel of experts will offer up their picks from four groups of players, based on Golf Channel's fantasy game, Fantasy Challenge. We will also keep track of their scores and standings. The panel includes: senior writers Rex Hoggard, Randall Mell and Jason Sobel; contributors John Hawkins and Win McMurry; editorial director Jay Coffin; 'Morning Drive' host Gary Williams and staff writer Ryan Lavner. They are joined by former 'Saturday Night Live' star Norm Macdonald, who will serve as a celebrity guest.

Group 1: Ernie Els: He's been on the verge of a big performance for a few months now. This could be the week.

Group 2: Rickie Fowler: The stats show he actually had a fine 2013 season, but expect a few more title contentions this time around.

Group 3: Kyle Stanley: After a season that included just three top-10s in 24 starts, he'll find himself on more leaderboards this season.

Group 1: Phil Mickelson: Showed good form earlier this month at the Presidents Cup, and he's well rested after a few weeks off.

Group 2: Hideki Matsuyama: Withdrew last week because of illness, but he still has posted seven consecutive top 25s on Tour.

Group 3: Kiradech Aphibarnrat: Tied for fourth a few weeks ago in an Asian Tour event, so roll with the big-hitting birdie machine in an event that requires low scores.

Group 4: Scott Hend: Has won twice this month, including last week in Macau, where he topped a field that included Ernie Els.

Group 1: Nick Watney: The defending champion turned his year around quickly after teaming with Sea Islan'ds Todd Anderson at the PGA Championship, finishing runner-up at the BMW Championship and T-9 at The Barclays.

Group 2: Graham DeLaet: Although the Canadian missed the cut in his first start after the Presidents Cup, his ball-striking and short game at Muirfield Village suggest he's bound for an even bigger season in 2013-14.

Group 3: Kiradech Aphibarnrat: Every time I type Aphibarnrat's name into a text message my cell phone auto-corrects to CIMB champion. And if that's not enough, consider that he's finished tied for 20th (2011) and 21st (2010) in his last two starts at the CIMB.

Group 4: Scott Hend: He won last week's Venetian Macau Open, his second victory in his last three starts, and has the game to overpower the Kuala Lumpur course.