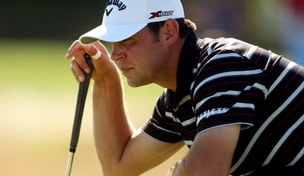 Getty Images
PEBBLE BEACH, CA - JUNE 16: Steve Stricker hits a chip shot during a practice round prior to the start of the 110th U.S. Open at Pebble Beach Golf Links on June 16, 2010 in Pebble Beach, California. (Photo by Jeff Gross/Getty Images)  -

This week marks the first event of the 2013-14 PGA Tour season as CordeValle Golf Club plays host to the Frys.com Open. Each week, a panel of experts will offer up their picks from four groups of players, based on Golf Channel's fantasy game, Fantasy Challenge. We will also keep track of their scores and standings. The panel includes: senior writers Rex Hoggard, Randall Mell and Jason Sobel; contributors John Hawkins and Win McMurry; editorial director Jay Coffin; 'Morning Drive' host Gary Williams and staff writer Ryan Lavner. They are joined by former 'Saturday Night Live' star Norm Macdonald, who will serve as a celebrity guest.

Group 1: Billy Horschel: Just to prove we are not going to cling to the world ranking line like we did last season. Besides, after getting his first Tour victory last season and finishing strong (T-18 at the BMW Championship and T-7 at the Tour Championship), the fourth-year Tour player seems destined for big things in 2013-14.

Group 2: Gary Woodland: Finished last season on a torrid pace, winning the Reno-Tahoe Open and finishing second at The Barclays. And well, let's be honest, last season was just two weeks ago.

Group 3: Bud Cauley: After retaining his Tour card through the Web.com Tour Finals, he seems poised to live up to the potential he showed in 2012 when he finished 38th in FedEx Cup points.

Group 4: Paul Goydos: As healthy as he's been in years and playing on a hard and fast golf course, the veteran showed signs of life during the Web.com Tour Championship (T-17) and could be this season's comeback surprise.

Group 1: Billy Horschel: One of last year's breakout stars, he got things going in the right direction again with consecutive top 20s in the FedEx Cup Playoffs.

Group 2: Gary Woodland: Game seems to be trending upward after a win in Reno, T-2 at The Barclays and two other top-25 finishes. He was T-9 here a year ago.

Group 4: Max Homa: Taking a flier with the 2013 NCAA champ, who is making his first pro start. When his putter is hot, he can contend.

Group 1: Billy Horschel: I spoke with Horschel at the Tour Championship, where he told me he's playing the Frys.com not because he needs to, but because he's excited about the direction of his game right now. That's good enough for me.

Group 2: John Peterson: Stick with the hot hand. In four starts during the Web.com Tour Finals, Peterson had four top-five finishes. No reason to think he won't still be playing well now that he's got a PGA Tour card.

Group 3: Brendan Steele: Gotta go with a Cali guy in the home state. In an otherwise mundane field, Steele is a, um, steal in Group 3. Expect a better season than he produced in 2013.

Group 4: Jamie Lovemark: At one point on the fast track to stardom, Lovemark was derailed for a spell but seems intent on getting back there again. With his PGA Tour card back, don't expect him to lose it again for a while.