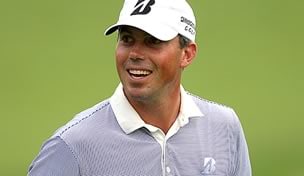 Getty Images
SINGAPORE - MARCH 08: Jiyai Shin of South Korea hits her approach shot on the ninth hole during the final round of the HSBC Women's Champions at the Tanah Merah Country Club on March 8, 2009 in Singapore (Photo by Scott Halleran/Getty Images)  -

Group 1: Bill Haas: Coachella Valley is like a second home for the FedEx Cup champion, having finished 2-1 in consecutive years at the Humana Challenge.

Group 2: Ryan Palmer: Has a solid record at the Humana having finished fourth last year and a fairways-and-greens game that fits this year's rotation.

Group 3: Brendon de Jonge: Sunday 71 derailed his chances at the Sony Open, but could give Virginia Tech back-to-back winners if he continues to putt like he did in Hawaii.

Group 1: Matt Kuchar: Finished runner-up here in 2010 en route to the PGA Tour money title, and finished T-7 here last year. Kuchar has showed that he can play well in the desert and I think he will do so again.

Group 2: Charles Howell III: Following his runner-up finish last week in the Sony Open, he seems ready to play strong this week at an event where he finished T-6 in 2002 and T-13 in 2011.

Group 3: Kyle Stanley: Finished 34th on the 2011 FedEx Cup points list in his rookie year. After a T-23 last week he comes in a little under the radar, but that is not a bad place to be.

Group 4: Brendon Todd: Got off to a great start in 2012 last week with a T-13 finish and is making his first appearance in the Humana Challenge.

Group 1: Matt Kuchar: Over the last two years, Kuchar has played well here as he finished runner-up in 2010 and T-7 in 2011. After a consistent but winless 2011, would love to start his year off with a win.

Group 2: Charles Howell III: Got off to the start that I thought he would last week - well, almost. I think his strong recent play will push him up the leaderboard this week as he seeks his first win in five years.

Group 4: Vaughn Taylor: 6 Humana Challenge starts, 6 cuts made with a pair of top-10 finishes. He is motivated after returning to Q-School in 2011 to get his Tour card back.

Group 2: Charles Howell III: Finished T-2 last week and was T-8 in greens in regulation and in strokes gained putting.

Group 3: Kyle Stanley: Hits the ball long and makes a lot of birdies. Young guns are on a roll in winning here.

Group 4: Chris DiMarco: He was T-13 at Waialae and I've got an inkling on him.

Group 1: Matt Kuchar: My hunch is a lot of people will take Bill Haas, but Kuchar has been on fire here the last two years.

Group 2: Charles Howell III: Name jumped out at me in this group. He's going to win this year at some point.

Group 3: Ricky Barnes: The dude makes a ton of birdies, which is what you need around here to hang.

Group 4: Briny Baird: No real reason. In this group you're just looking for someone to make the cut.

Group 1: Bill Haas: The FedEx Cup champ tied for second last year in his title defense in La Quinta. He tied for 20th at Kapalua, but is the early Tour leader in driving accuracy AND greens in regulation.

Group 2: Charles Howell III: Couple the fact he's coming in hot off a T-2 at the Sony Open with his T-13 last year, and this could be the sight of his first win this decade.

Group 3: Brian Gay: His game looks good after tying for sixth last week in Hawaii. He also has finished inside the top-20 here for the last three years, including T-5 last year.

Group 4: Vaughn Taylor: He's a recent newlywed which, for Bill Haas, worked out quite splendidly last year on Tour. Taylor has been consistent here in the past with top-25s in three of his last four starts.

Group 1: Bill Haas: One of those times when I'm forced to play defense. Haas has been a monster at PGA West.

Group 2: Charles Howell III: He continues to thrive after a runner-up finish at the Sony.

Group 3: Kyle Stanley: Too many great fits to mention but I'm thrilled that he's in Group 3.