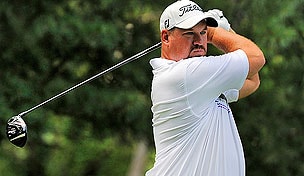 Getty Images
JOHANNESBURG, SOUTH AFRICA - JANUARY 14: Soren Hansen of Denmark watches his tee shot during the first round of the Joburg Open at Royal Johannesburg and Kensington Golf Club on January 14, 2010 in Johannesburg, South Africa. (Photo by Stuart Franklin/Getty Images)  -

This week marks the fifth event of the 2013-14 PGA Tour season as Sea Island Club plays host to The McGladrey Classic. Each week, a panel of experts will offer up their picks from four groups of players, based on Golf Channel's fantasy game, Fantasy Challenge. We will also keep track of their scores and standings. The panel includes: senior writers Rex Hoggard, Randall Mell and Jason Sobel; contributors John Hawkins and Win McMurry; editorial director Jay Coffin; 'Morning Drive' host Gary Williams and staff writer Ryan Lavner. They are joined by former 'Saturday Night Live' star Norm Macdonald, who will serve as a celebrity guest.

Group 1: Brendon de Jonge: He garnered attention in the Presidents Cup and despite experiencing some lows since then, he returns to Sea Island where he tied for fourth last year.

Group 2: Freddie Jacobson: The Swede tied for ninth in his last PGA Tour start in Las Vegas, and despite having only played two competitive rounds in Sea Island (back in 2010), he has the game that translates anywhere when he is playing well, as evidenced by how he started the 2013 season with top-10s in three of his first four starts.

Group 3: Camilo Villegas: Camilo is ready to string four competitive rounds together. At the Frys.com Open last month, a third-round 77 derailed a top finish, one that could have been much better than his T-26. He tied for 20th in this event last year.

Group 4: Y.E. Yang: Hard to believe the major champ from only four years ago is in Group 4. He's making his first start here, and I believe his game can't be too far away. His best recent finish was third place about six weeks ago on the Japan Golf Tour.

Group 1: Boo Weekley: Although he may be a tad jet-lagged after his trip to Asia, if the wind blows, the Seaside Course is perfect for a ball-striker like Weekley and he hasn't missed a cut since July.

Group 2: Charles Howell III: CH3 is off to one of his signature early-season runs (this is, after all, the early stages of the 2013-14 campaign), having finished in the top 10 in his last two starts (T-7 CIMB Classic and T-5 Shriners Hospitals for Children Open).

Group 3: Brian Harman: The left-hander lives within walking distance of the Seaside Course and knows the greens as well as anyone. He's also posted top-five finishes in two of his last five Tour starts.

Group 4: Hudson Swafford: After a few years of seasoning on the Web.com Tour, the University of Georgia standout could surprise some with his play this season and Sea Island (Ga.) Resort has become his second home.

Group 1: Zach Johnson: At home at Sea Island helps, but not as much as being on a hot streak (seven top-10 finishes in nine starts).

Group 2: David Toms: Finished second to Tommy Gainey at Sea Island last year, was T-3 there two years before that.

Group 3: Brian Gay: This event can quickly turn into a putting contest. Gay knows how to win those.

Group 4: Chad Campbell: Has had his struggles, but he showed some good form this summer and has a T-7 at Sea Island on his resume.

Group 1: Webb Simpson: Just a few weeks removed from his first win since the 2012 U.S. Open, Simpson often gets hot and stays hot.

Group 2: Chris Kirk: Plenty of UGA products in the field from which to choose, and most of 'em will say Kirk has as much talent as anyone.

Group 3: Camilo Villegas: Ready for a bounceback season, he plays his best golf on courses where birdies are plentiful.

Group 4: Justin Thomas: Don't be fooled by him being the last player ranked in Group 4 - he's got the game to be a household name someday.

Group 1: Zach Johnson: The resident of nearby St. Simons Island finished the 2013 season as hot as any player on the PGA Tour. Now back on a course he knows as well as anyone, the 10-time winner should be able to keep up a streak of hot play that has now extended more than three months.

Group 2: Charles Howell III: A native of nearby Augusta, Howell combines recent form and past event history better than almost anyone in the entire field. He's begun his 2013-14 season with two top-10 finishes in his first three starts, including a T-5 in Las Vegas, and has finished T-7 or better in two of his three career starts at Sea Island.

Group 3: Vijay Singh: The 50-year-old has experienced a bit of a resurgence in the past few weeks, chasing his runner-up at the Frys.com Open with a T-23 finish the following week at the Shriners Hospitals for Children Open. The Fijian played well at Sea Island a year ago before struggles over the weekend dropped him into a tie for 27th.

Group 4: Justin Thomas: The former Alabama product is familiar with Sea Island, having won an SEC championship here in 2012. Having shined last year at the Travelers Championship, Thomas is eager to follow in the footsteps of Max Homa, another recent college player who contended down the stretch at the Frys.com Open last month.