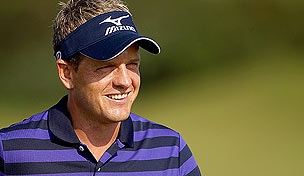 Group 1: K.J. Choi: He cashes checks at Riviera. Never missed a cut. In 11 starts has four top-10s, including a T-7 last year. He knocked the rust off overseas on the desert swing, but has had a week to rest and readjust back in the United States.

Group 2: Aaron Baddeley: I typically avoid the defending champion, but not at Riviera. Since 2003 we've seen two back-to-back champions here, a trend as winners and runner-ups' names are frequently repeated in this tournament's history books. Oh, and he tied for fourth last week.

Group 3: Jimmy Walker: He comes in off a T-9 at Pebble, one of two top-10s in his last three starts, and he finished T-4 in this event a year ago.

Group 4: Fred Couples: Despite the daily struggles with his back, Freddie always seems to find a way into contention at Riviera. He loves L.A., loves the course, loves the people he reconnects with here each year, and he finished T-7 here last year after spending a majority of the week in the lead.

Group 1: Phil Mickelson: Got burned last week by ranking him but not picking him. He's a two-time winner and clearly rejuvenated after Pebble.

Group 4: Fred Couples: T-33 last week in Dubai, has his back fixed and is celebrating his 30th Riviera start.

Group 1: Luke Donald: The world No. 1 is making his PGA Tour season debut this week and if we learned anything from 2011 it was that 'Luke Donald Disease' may not collect a ton of trophies but it cashes a lot of checks.

Group 4: Jason Gore: When it comes to feel-good stories it's tough to find a better rooting favorite than Los Angeles-area resident who landed a coveted sponsor exemption into the Northern Trust thanks to a viral campaign on Twitter.

Group 2: Aaron Baddeley: The defending champion posted a solo fourth at Pebble Beach last week. He's cashed at Riviera in all nine of his starts.

Group 3: Jimmy Walker: Recorded one of his three fourth-place finishes in 2011 here. Top-10s in two of his last three starts, including a share of ninth at Pebble Beach.

Group 4: David Hearn: First-timer at Riviera has had trouble avoiding the big number lately but he's a good fit with the course profile.