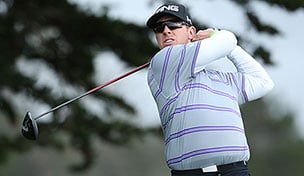 Getty Images
Luke Donald of England hits his 2nd shot on the 1st hole during day 2 of the BMW PGA Championship at Wentworth on May 22, 2015 in Virginia Water, England. (Photo by Andrew Redington/Getty Images)  -

This week marks the 13th event of the 2013-14 PGA Tour season as many of the game's best tee it up for the Northern Trust Open at historic Riviera. Each week, a panel of experts will offer up their picks from four groups of players, based on Golf Channel's fantasy game, Fantasy Challenge. We will also keep track of their scores and standings. The panel includes: senior writers Rex Hoggard, Randall Mell and Jason Sobel; contributors John Hawkins and John Antonini; editorial director Jay Coffin; 'Morning Drive' host Gary Williams; staff writer Ryan Lavner and defending fantasy champion Charlie Rymer.

Group 1: Dustin Johnson: DJ hasn't finished worse than sixth this season, including his runner-up showing last week at Pebble Beach, and is trending in the right direction, having finished T-3/MC/T-4/MC in his last four starts at Riviera.

Group 2: Hunter Mahan: The ultimate ball-striker on a ball-striker's golf course. Considering that on his way to a sixth-place finish last week at Pebble Beach he finished in the top 25 in every major statistical category, there are no weaknesses in Mahan's game right now.

Group 3: John Merrick: Although this is a bit of a sentimental pick following his breakthrough victory last year at Riviera, he hasn't missed a cut on the PGA Tour since last June.

Group 4: Stuart Appleby: The Australian faded after a fast start last week at Pebble Beach, but he has a renewed desire to compete and has played well in the past in Los Angeles, finishing third in 2004.

Group 1: Dustin Johnson: Three top 10s in six career starts at the Riv, and he hasn't finished worse than sixth in the new wraparound season.

Group 3: Pat Perez: Quietly having a nice calendar year, with four top 15s in five 2014 starts, including a T-7 last week at Pebble.

Group 4: Will MacKenzie: Has six top 15s in eight starts this season, which makes him great value in the last group.

Group 1: Dustin Johnson: Like the strong start to the 2013-14 season, and he has played well at Riviera before.

Group 2: Graham DeLaet: The guy's been rolling nicely since the Presidents Cup last fall. Going with a hot hand.

Group 3: John Merrick: Counting on the defending champ to remember the winning formula.

Group 4: Fred Couples: Never count out Freddie at Riviera. It brings out his best.

Group 1: Jordan Spieth: Rode him to a T-4 finish last week. No reason to jump off the horse now.

Group 2: Keegan Bradley: Speaking of horses, this is a course built for this one, who reached a playoff here two years ago.

Group 4: Trevor Immelman: All or nothing this year, with three results of 21st or better and four missed cuts.

Group 1: Charl Schwartzel: He's won twice since we've last seen him in the U.S., and although I don't like the pedestrian T-59 at the Joburg Open a week ago, I do like the T-3 he put up at Riviera in 2013.

Group 3: Pat Perez: He's trending in the right direction with four top-11 finishes since the calendar turned to 2014, including a T-7 at Pebble Beach last week.

Group 4: Aaron Baddeley: Another past champion at Northern Trust (2011), Badds has made 10 cuts in his previous 11 starts at Riviera.