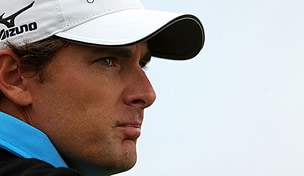 This week marks the sixth event of the 2013-14 PGA Tour season as El Camaleon plays host to the OHL Classic at Mayakoba. Each week, a panel of experts will offer up their picks from four groups of players, based on Golf Channel's fantasy game, Fantasy Challenge. We will also keep track of their scores and standings. The panel includes: senior writers Rex Hoggard, Randall Mell and Jason Sobel; contributors John Hawkins and Win McMurry; editorial director Jay Coffin; 'Morning Drive' host Gary Williams and staff writer Ryan Lavner. They are joined by former 'Saturday Night Live' star Norm Macdonald, who will serve as a celebrity guest.

Group 2: Brooks Koepka: The American has already solidified himself as a potential star, playing his way from the Challenge Tour to European Tour status this year, and after his tie for third at the Frys.com Open, he's closing in on a PGA Tour card.

Group 4: Hudson Swafford: The rookie is off to an uneventful start to his PGA Tour career, with two missed cuts and a tie for 30th, but Swafford has the distance to overpower any course and could be the new season's first surprise contender.

Group 1: Charles Howell III: As I wrote recently, don't be surprised if the second half of CH3's career mirrors that of Matt Kuchar.

Group 2: Matt Every: He's on the short list of best player to have never won, but don't expect him to remain there for long.

Group 3: Spencer Levin: Sidelined by injuries over the past year, he's a big-time talent and a veritable steal in Group 3.

Group 4: Joe Durant: Fairways and greens mean money in Mayakoba, and Durant is just about the straightest shooter around.