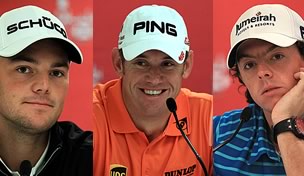 This is another double week for fantasy players! GolfChannel.com experts offer up their fantasy choices below for the Omega Dubai Desert Classic, and their selections for the AT&T Pebble Beach National Pro-Am can be seen here. Each week a panel of experts will offer up their picks from four groups of players based on Golf Channel's new fantasy game, Fantasy Challenge. We will also keep track of their scores and standings. The panel consists of: senior writers Rex Hoggard, Randall Mell and Jason Sobel; contributors John Hawkins and Win McMurry; editorial director Jay Coffin; RotoWorld.com's Rob Bolton; 'Morning Drive' hosts Gary Williams and Erik Kuselias; and Golf Talk Central contributor Ryan Ballengee.

Group 1: Alvaro Quiros: This is already starting to be an unusual year so sign me up for Quiros for the hat trick.

Group 2: Ross Fisher: He shared tenth place last year, and knows how to win. The Englishman has four titles in Europe dating back to 2007.

Group 4: Anders Hansen: 12th and 14th in his two starts this year and with Kingston, he tied for runner-up a year ago.

Group 1: Rory McIlroy: The obvious pick this week has not played poorly in six months. He had his first pro win in Dubai, too.

Group 2: Robert Rock: Going for the Emirate Double, Rock has been in the top 20 in Dubai in the last two seasons.

Group 3: Chris Wood: Like Robert Rock, Wood has been in the top 20 in the last two DDCs. In the top 20 last week in Qatar, Wood is ready to play.

Group 4: Jose Maria Olazabal: The Ryder Cup captain has been playing some hot golf to start this season. He was T-15 last year in Dubai.

Group 1: Rory McIlroy: More impressed with Rory than I am with Westwood or Kaymer. Easy pick.

Group 2: Nicolas Colsaerts: This man is due for big things in 2012; let's hope it begins now.

Group 4: Simon Khan: Picked him last week and he played well. Will ride it once more.

Group 1: Rory McIlroy: The Ulsterman improved with each round in Abu Dhabi and he spent last week in Dubai preparing for this week's stop, a potent combination for the world's second-ranked player.

Group 2: Paul Lawrie: One of the game's greatest comeback stories continues to climb. At this point last year the former Open champion was 253rd in teh world. Last week's victory in Qatar vaulted him inside the top 50.

Group 3: James Kingston: The South African is 2-for-2 in top-20s in the desert this season and he finished runner-up in Dubai last year.

Group 4: Peter Uihlein: Although Dubai is the young American's third professional start, he can make a statement with a solid week against a deep field.

Group 1: Rory McIlroy: Contending every time he tees it up. Two-stroke penalty in Abu Dhabi might have cost him the victory. Instead, solo second.

Group 2: Robert Rock: Could have made a case for Nicolas Colsaerts but Rock is coming off a gutty victory in Abu Dhabi. No worse than T-12 in his last four starts, and T-20 in his last two visits here.

Group 3: James Kingston: While tempted by 2011 Asian Tour Order of Merit leader Juvic Pagunsan, I'll stick with the South African who has top-20s the last two weeks and a T-2 here a year ago.

You can watch complete coverage of the Omega Dubai Desert Classic live on Golf Channel Thursday-Friday  from 4:30AM-8:30AM ET and Saturday-Sunday from 4AM-8AM ET.