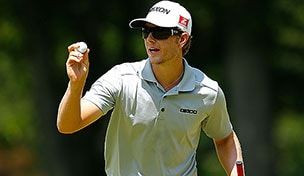 Getty Images
MARANA, AZ - FEBRUARY 26: J.B. Holmes hits an approach shot on the ninth hole during the quarterfinal round of the Accenture Match Play Championship at the Ritz-Carlton Golf Club on February 26, 2011 in Marana, Arizona. (Photo by Sam Greenwood/Getty Images)  -

This week marks the 16th (and 17th) events of the 2013-14 PGA Tour season as a full field heads to Trump International - Puerto Rico for the Puerto Rico Open (our Expert Picks for the WGC-Cadillac Championship can be viewed here). Each week, a panel of experts will offer up their picks from four groups of players, based on Golf Channel's fantasy game, Fantasy Challenge. We will also keep track of their scores and standings. The panel includes: senior writers Rex Hoggard, Randall Mell and Jason Sobel; contributors John Hawkins and John Antonini; editorial director Jay Coffin; 'Morning Drive' host Gary Williams; staff writer Ryan Lavner and defending fantasy champion Charlie Rymer.

Group 1: Brooks Koepka: He narrowly missed getting into the WGC-Accenture Match Play and looks like he has something to prove in his second PGA Tour start of 2014.

Group 2: Alvaro Quiros: It wasn't that long ago that the Spaniard was a WGC staple, and he's playing like he's poised to return to that echelon with five consecutive made cuts to start the season and a tie for fifth in his last start at the Joburg Open.

Group 3: Jonathan Byrd: Not off to his best start this season, but a return to the east coast should help and he was solid on Monday at the Seminole Member-Pro, tying for ninth in the gross division.

Group 4: Max Homa: A bit of a flyer for the young player, who has missed his last three PGA Tour cuts, but he was solid in his 2013-14 debut (T-6 at Frys.com Open) and could surprise some observers.

Group 1: Chris Stroud: He's been knocking at the door for a while. I say his first win comes this week.

Group 2: Brian Stuard: At some point, people are going to start taking notice of how good this guy's been.

Group 3: Alex Cejka: The guys at Team Cejka headquarters - it's a real thing, people - have been singing their man's praises this year.

Group 4: Hudson Swafford: He went to the University of Georgia. 'Nuff said.

Group 1: Chris Stroud: He's been knocking at the door since his playoff loss to Ken Duke at Hartford. In 2013-14 he was T-3 in Malaysia and Mayakoba, so bet on another strong finish away from the U.S. mainland.

Group 2: Brian Stuard: Speaking of Mayakoba, Stuard was second there. He also had top 10s at Sony and Humana and is 13th in the current FedEx Cup standings. He was T-4 in Puerto Rico in 2013.

Group 3: Vaughn Taylor: Like 2013 Puerto Rico Open champ Scott Brown, Taylor is from Augusta, Ga. He won't get a Masters berth with a win in Puerto Rico, but it will certainly jump-start the career of the two-time PGA Tour winner.

Group 4: Hudson Swafford: He played well enough early at PGA National that I'll discount his final-round 77. He's in the top 50 on Tour in distance, accuracy and greens hit. Now he just needs to make a few more putts.