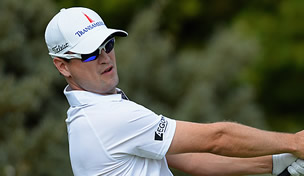 Getty Images
PEDRENA, SPAIN - MAY 11: Baldomero Ballesteros carries the urn containing the ashes of his brother Seve Ballesteros during the funeral service held for the legendary Spanish golfer on May 11, 2011 in Pedrena, Spain. Top-ranked golf players have joined family members and friends to pay their last respects to the late golf great, who died on May 7, 2011 from complications arising from a brain tumor, in his home town parish church. (Photo by Jasper Juinen/Getty Images)  -

This week marks the second event of the 2013-14 PGA Tour season as TPC Summerlin hosts the Shriners Hospitals for Children Open. Each week, a panel of experts will offer up their picks from four groups of players, based on Golf Channel's fantasy game, Fantasy Challenge. We will also keep track of their scores and standings. The panel includes: senior writers Rex Hoggard, Randall Mell and Jason Sobel; contributors John Hawkins and Win McMurry; editorial director Jay Coffin; 'Morning Drive' host Gary Williams and staff writer Ryan Lavner. They are joined by former 'Saturday Night Live' star Norm Macdonald, who will serve as a celebrity guest.

Group 1: Hideki Matsuyama: The Japanese phenom has been on a roll, finishing tied for third last week at the Frys.com Open following a solid debut at the Presidents Cup (1-3-1). He also has the added motivation of making the most of this week's start, since he skipped the Japan Open back home to play in Las Vegas.

Group 2: Robert Garrigus: Slimmed down and motivated, Garrigus posted a 63 on Day 2 at CordeValle and has the long game to compete at TPC Summerlin.

Group 3: John Peterson: Just for future reference, we plan to pick Peterson every week he is available. Think Jordan Spieth with a Tour card and a veteran caddie.

Group 4: Andres Gonzales: It's been an eventful few weeks for Gonzales, having narrowly missed his Tour card at the Web.com Tour Championship and a top-10 finish at the Frys.com Open. But he landed a last-minute sponsor exemption into the Last Vegas stop and is due for a change of luck.

Group 1: Zach Johnson: Making only his second start at TPC Summerlin - he tied for 10th in 2008 - but he hasn't finished outside the top 30 since June and has seven top-10 finishes in his last eight starts.

Group 2: Brendon de Jonge: The biggest birdie machine on the PGA Tour makes his 2013-14 debut at the course where he finished second last year. He has a string of four consecutive top-20 finishes on Tour.

Group 3: John Peterson: Closed out the Web.com Tour with five consecutive top-five finishes, then finished T-21 at the Frys.com Open in his first start as a PGA Tour member.

Group 4: Spencer Levin: Plagued by injury last season, he returned to the big tour last week with a T-12 at CordeValle. He has finished in the top five in his last starts in Vegas.

Group 1: Scott Piercy: Few in this weeks field, if any, have played as much desert golf in their careers as this Vegas native.

Group 2: Charley Hoffman: Two picks, two hometown homers. Hoffman played his college golf at UNLV and has been a resident ever since.

Group 3: Kevin Na: In his first appearance back after injury, the former Vegas champ finished T-3 last week at CordeValle.

Group 4: Spencer Levin: Another solid talent who spent much of the 2013 season rehabbing injury, but enjoyed a successful week in the opener.