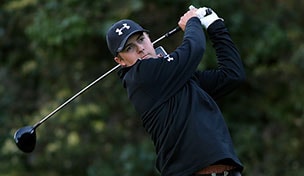 Getty Images
ST ANDREWS, SCOTLAND - JULY 15: Jordan Spieth of the United States speaks at a press conference ahead of the 144th Open Championship at The Old Course on July 15, 2015 in St Andrews, Scotland. (Photo by Mike Ehrmann/Getty Images)  -

This week marks the 18th event of the 2013-14 PGA Tour season as the Florida swing heads to Tampa for the Valspar Championship, where a full field of players will battle the "Snake Pit" at Innisbrook. Each week, a panel of experts will offer up their picks from four groups of players, based on Golf Channel's fantasy game, Fantasy Challenge. We will also keep track of their scores and standings. The panel includes: senior writers Rex Hoggard, Randall Mell and Jason Sobel; contributors John Hawkins and John Antonini; editorial director Jay Coffin; 'Morning Drive' host Gary Williams; staff writer Ryan Lavner and defending fantasy champion Charlie Rymer.

Group 1: Matt Kuchar: Other than a missed cut in 2007, he's never finished outside the top 20 in six starts at Innisbrook and has been trending in the right direction lately, with a tie for 13th last week at Doral and a tie for ninth at the WGC-Accenture Match Play.

Group 2: Ernie Els: The heartbreak of 2012 - when he bogeyed his last two holes and finished a stroke outside a playoff - aside, Els has been reenergized by the short putter this year and his ball-striking has been nearly flawless in 2014.

Group 3: David Toms: He inexplicably has never posted a top-10 finish at Innisbrook, a golf course that would seem to be a perfect fit for his fairways-and-greens game, but following a tie for fourth last week in Puerto Rico, he's tough to pass up.

Group 4: Jason Gore: Sentimental pick here. He only received a spot into the field this week via his top-10 finish last week in Puerto Ricok, and needs another hot week if he's going to earn his way back onto the PGA Tour.

Group 1: Jordan Spieth: He's annoyed enough with his weekend frustrations to do something about it this week. He was T-7 at Innisbrook a year ago.

Group 2: Harris English: The guy's striping his ball, becoming a regular factor, and there's no reason to believe he won't be one again this week.

Group 3: Russell Knox: Going with a hot hand here. Knox is coming off a T-2 at the Honda Classic, and also had a T-10 at Torrey Pines earlier this season.

Group 4: Stuart Appleby: Liking his form this season, with a T-8 finish at Honda and a T-9 at the Humana Challenge in January.

Group 2: Gary Woodland: The 2011 champion is primed and ready to win another one soon. And yeah, for those keeping track, I'll keep picking him until he does.

Group 4: James Driscoll: Seems like only a matter of time before the veteran finally breaks through for his first victory.