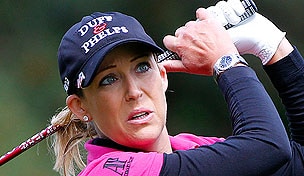 The LPGA heads to Pittsford, N.Y., this week for the Wegmans LPGA Championship. Each week, a panel of experts will offer up their picks from four groups of players, based on Golf Channel's fantasy game, Fantasy Challenge. We will also keep track of their scores and standings. The panel includes: senior writers Rex Hoggard, Randall Mell and Jason Sobel; contributors John Hawkins and Win McMurry; editorial director Jay Coffin; 'Morning Drive' host Gary Williams and staff writer Ryan Lavner. They are joined by former 'Saturday Night Live' star Norm Macdonald, who will serve as a celebrity guest.

Group 1: Cristie Kerr: Always dangerous, but even more so when she’s playing in the tri-state area, which should provide a little extra motivation this week.

Group 2: So-Yeon Ryu: With four top-10s in 10 starts this season, this major champion is about as underrated as they come.

Group 3: Michelle Wie: Call me naïve, but last week’s T-9 finish at the Jersey Shore has me thinking Wie may be turning things around.

Group 4: Amanda Blumenherst: Coming off a title contention last week, this Duke product may finally be ready to fulfill her vast potential.

Group 2: So-Yeon Ryu. Still searching for that first victory of 2013, but she continues to give herself opportunities and Locust Hill would appear to be a good fit.

Group 4: Reilley Rankin. Another player who has struggled this season, but her strength is her driving accuracy (she’s 82nd on tour in finding fairways) and she has a decent record at Locust Hill (T-30 in 2011).

Group 1: Cristie Kerr: Still glowing from Kingsmill win as she moves to another course she thrives upon. Kerr won by 12 at Locust Hill in 2010.

Group 2: So Yeon Ryu: She'll feel like she's on a U.S. Women's Open setup this week.

Group 4: Amanda Blumenherst: Turned a corner with a run into contention at Shoprite last week.

Group 1: Inbee Park: The top ranked golfer in the women's game comes in with momentum following her second major victory at the Kraft Nabisco Championship in April. She has top-10 finishes two of the last three years at the event, and top-14 finishes for the last four consecutive years.

Group 3: Brittany Lincicome: She's had an up-and-down season, but has finished inside the top 25 in this major for the last three years.

Group 4: Vicky Hurst: She has two top-25s this year and has motivation to improve her best finish in this major since it's lacking on her resume.