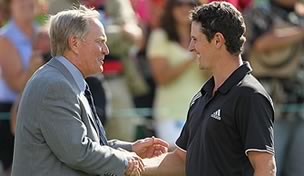 Group A: Luke Donald: Simply put, the newly crowned world No. 1 is playing better than anyone else and he’s been close at the Memorial before (T-6 in 2008).

Group B: Justin Rose: The Englishman ignited here last year on his way to a torrid first-T-9-first run and his swing coach Sean Foley likes where his pupil is at.

Group C: Arjun Atwal: The ultimate “under the radar” player, Atwal is 15th in the Tour’s new strokes gained putting statistic, which seems to be important at Muirfield Village.

Group A: Phil Mickelson: Comfortable at Muirfield Village now (T-9, T-4, T-5 among last five starts there), he’s got to be feeling left out of the mix in this year’s biggest events and stories.

Group B: Rickie Fowler: Finishes off what he started last year, when he was runner-up to Justin Rose.

Group C: Pat Perez: Terrible early history at Jack’s place, but he seems to have found a plan there the last couple years.

Group A: Steve Stricker: When in doubt, go with the best putter available.

Group C: Kenny Perry: If he's ever going to reclaim the magic for one week, it'll be at this tournament.

Group A: Matt Kuchar: I'm getting back on the Kuchar bandwagon. He's gotta pick up a trophy at some point.

Group C: Trevor Immelman: How about a blast from the past in a now healthy Immelman?

Group A: Nick Watney: Got back in the mix last week. Should have a better weekend at Muirfield this week.

Group B: Lucas Glover: The bearded one has been playing well lately and we like guys on a hot streak.

Group C: Kenny Perry: Perry plays certain courses very well. This is one of them.

Group A: Luke Donald: If Keegan Bradley could capture the victory for me last week, surely Luke Donald can make it two in a row, right?

Group B: Justin Rose: Did I mention that Bradley won for me last week? If he can do it, the guy who torched the place last year should have another chance to be in contention.

Group C: Vaughn Taylor: Bradley's win vaulted him intro Group B, so I'll go with a guy who I have a gut feeling about. It worked out well last week, if you didn't notice.

Group A: Hunter Mahan: Mahan is playing great golf in 2011 and we have seen several times this year that players can win, regardless of the track, when they are playing well.

Group B: Rickie Fowler: We keep waiting for Fowler to get that first win. He was runner-up here last year and could be one better this week.

Group C: Pat Perez: He has three top-6 finishes in the last six weeks and while he has not played great at Jack’s place, Perez had his best finish in 2010 (T-19).

Group A: Matt Kuchar: With his tie for sixth last week, he enters an event where he has four top-13 finishes in the last four years.

Group B: Rickie Fowler: Fowler has shown he likes Muirfield Village, having finished runner-up finish in 2010. He can definitely contend again.

Group C: Fred Couples: Couples in contention would be the top story of the week. He won at Muirfield Village in 1998 and finished runner-up in 2004 and 2005.

Group A: Matt Kuchar: The guy loves this place. He's not finished outside of the top-10 in his last three Memorial starts and is ranked 7th in the world right now.

Group B: Steve Marino: It's time to get back on board the Marino Express. This guy is going to win sometime and, if he doesn't, he will finish inside the top-20. Eventually, this pick will pay off big.

Group C: Kenny Perry: For whatever reason, Kenny Perry gets excited to play Memorial. He's in excellent shape, likes the course, and is scrambling well on the Champions Tour.

Group A: Luke Donald: I’m in no position to get cute. I’ll take his nine consecutive top-10s and sleep well. And jet lag is of zero concern.

Group B: Stewart Cink: He’s cashed in his last 13 starts here, six of which were top-10s, including his last two.

Group C: Brandt Jobe: Coming off his fifth top-25 of the year. Ranks seventh in total driving and 23rd in greens hit. Placed T-4 here in 2006.