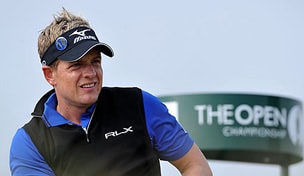 Here are GolfChannel.com’s Power Rankings, the top 10 favorites for the Open Championship:

1. Rory McIlroy: He hasn't played since winning the U.S. Open, but his dominating performance still resonates, making him the favorite to make it two majors in a row.

3. Luke Donald: The world's No. 1-ranked player is fresh off a win last week in Scotland. The only reason he's not the favorite this week is due to his lackluster Open results: one top-10 in 10 starts.

5. Steve Stricker: Wait ... maybe Stricker is the guy Americans can depend on this week. Despite only one career top-10 at the British, he is coming off a threepeat at the John Deere.

6. Jason Day: Second at The Masters. Second at the U.S. Open. He tied for 60th in his lone Open appearance last year.

7. Martin Kaymer: We talk a lot about McIlroy, Donald and Westwood, but little about Kaymer. The oft-overlooked German is still third in the world and analysts say Royal St. Georges' fits his cut shot.

8. Graeme McDowell: Has played well in spots so don't be surprised to find his name near the top of the leaderboard early. However, he hasn't been able to string together four solid rounds this year.

9. Adam Scott: Eleven starts, one top-10 at the Open. The good news: Louis Oosthuizen had never made an Open cut prior to last year's runaway victory.

10. Paul Casey: Seems to play himself into contention in at least one major a year. He hasn't done much in the first two campaigns this year, so perhaps he's due.