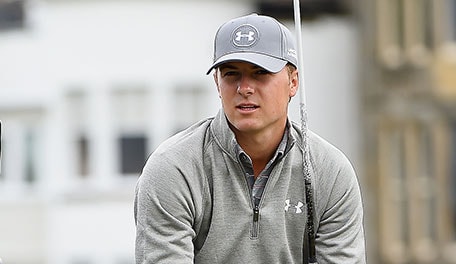 The 36th event of the wraparound season is upon us, as the PGA Tour heads to Scotland for the Open Championship. A field of 156 will tackle the Old Course at St. Andrews, where the winner will leave with the coveted claret jug.

Rory McIlroy won this event a year ago over Sergio Garcia and Rickie Fowler, but he won't defend his title. Here are 10 players to watch in Scotland:

1. Jordan Spieth: With no Rory in the field, Spieth is a clear favorite as he looks to pick up the third leg of the single-season Grand Slam. Spieth may be a newcomer to the nuances of the Old Course, but he enters with plenty of momentum after his John Deere win and has shown at Augusta National that he is often ahead of the consensus learning curve.

2. Dustin Johnson: Johnson will look to avenge his 72nd-hole meltdown at Chambers Bay, and he'll play the first two rounds alongside Spieth, the man who instead left with the U.S. Open trophy. Johnson has four top-15 finishes in his last five Opens, including a T-2 finish in 2011, and also finished T-6 this year at the Masters.

3. Rickie Fowler: Phil Mickelson showed two years ago that it is possible to snag the Scottish Open and Open Championship in consecutive weeks, a feat his friend Fowler will look to emulate after his win Sunday at Gullane. Fowler has continued to build on the momentum of his Players victory and appears on the cusp of a major breakthrough.

4. Sergio Garcia: The Spaniard continues to put himself into contention at the Open, and he now has five top-10 finishes in the last 10 years at this event. That includes a runner-up last year and a T-5 finish at St. Andrews in 2005, where he also finished T-14 in 2010.

5. Adam Scott: While the putter has not cooperated this year, Scott's record in this event cannot be ignored. The Aussie has cracked the top 5 each of the last three years, highlighted by his runner-up in 2012, and with Steve Williams back on the bag he finished T-4 at the U.S. Open last month.

6. Hideki Matsuyama: Matsuyama has put together an incredibly consistent season, with nine straight top-25 finishes dating back to the Northern Trust Open in February. He has made the cut in each of his two Open appearances, including a T-6 finish at Muirfield two years ago.

7. Louis Oosthuizen: The defending (venue) champ routed the field on the Old Course last time around, winning by seven shots in 2010. Oosthuizen rallied for a runner-up finish at Chambers Bay, one of five top-10 finishes this season.

8. Henrik Stenson: The Swede was a runner-up two years ago at Muirfield, one of three top-3 finishes he has had in the Open since 2008. Stenson has cooled somewhat since a blistering start to the season, but he did open with a 65 at Chambers Bay and still tops the PGA Tour in GIR percentage.

9. Paul Casey: The Englishman challenged five years ago on the Old Course, and he returns to St. Andrews with plenty of momentum. Casey has lost two playoffs already this season on the PGA Tour in addition to a near-miss at the Honda Classic, and he would put a stamp on his renaissance with a win this week.

10. Justin Rose: Rose already won this year in New Orleans and nearly took the title at the Memorial. He started strong at Gullane before fading over the weekend, and the Englishman has the skillset to challenge at the Open even if his best result as a pro came back in 2007 when he finished T-12.