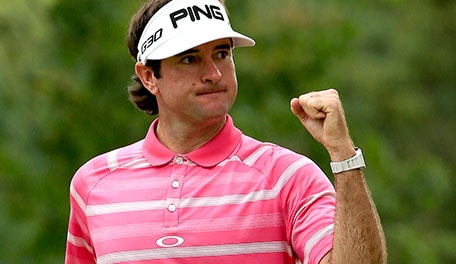 The 42nd event of the wraparound season is upon us, as the PGA Tour heads to Wisconsin for the PGA Championship. A field of 156 will tackle Whistling Straits Golf Club, which last hosted the season's final major in 2010.

Rory McIlroy won this event a year ago over Phil Mickelson and Rickie Fowler. Here are 10 players to watch in Sheboygan:

1. Bubba Watson: Don't sleep on the world No. 3. Watson enters off back-to-back runner-up finishes, including last week at Firestone, and he leads the Tour this season in total strokes gained. Watson lost in a playoff here in 2010 and should again find Whistling Straits to his liking.

2. Justin Rose: After a near-miss at Bridgestone, the Englishman offered a rare bit of bold self-assessment when he said he was currently the best player in the world, tee to green. Should the putter cooperate this week, he might be able to remove that distinction. Rose enters with four top-six finishes in his last five starts.

3. Jordan Spieth: Spieth has been the best player this year, but his PGA Championship credentials are lacking: missed cuts in both 2013 and 2014. He'll likely make the weekend this time, especially after five straight top-10 finishes and a Sunday 66 at Firestone.

4. Jason Day: The Aussie couldn't get past the 16th hole at Firestone, but he still contended deep into the final round. Day was surprisingly in the mix at Whistling Straits back in 2010 and has now compiled four straight top-12 finishes, including a win in Canada.

5. Rory McIlroy: The world No. 1 returns from injury in his first start since the U.S. Open. McIlroy will likely face some rust in the early rounds, but he missed a playoff by only one shot here in 2010 and has feasted on the season's final major ever since.

6. Brooks Koepka: Koepka cooled off after his breakthrough win in Phoenix, but he is clearly back on track after five straight top-20 finishes that included four straight rounds in the 60s at Firestone. Koepka's length off the tee will be a huge asset, especially if conditions remain soft.

7. Dustin Johnson: Johnson returns to the scene of the crime, fresh off another major heartbreak earlier this summer. As we saw at Chambers Bay and St. Andrews, he has the game to grab the lead at majors. His closing efforts at both the Old Course and Firestone, though, raise a red flag.

8. Zach Johnson: The most recent major winner returns to a course where he, like McIlroy, fell one shot short in 2010. Johnson doesn't seem to fit the mold of a contender at Whistling Straits, but he has seven top-20 finishes in his last nine starts. Plus, players seem to be winning majors in pairs as of late.

9. Robert Streb: He isn't flashy, but he sure is effective. Streb finished fifth at Firestone and now has eight top-10 finishes this season, including a win and a playoff loss. Now up to fifth in the FedEx Cup standings, Streb has seven top-20 finishes in his last eight starts and has shown an ability to contend on a variety of venues.

10. Rickie Fowler: Fowler chased his runner-up in Virginia with a T-10 finish in Akron, and once again carries momentum into a major. Fowler made his PGA Championship debut here in 2010 and after contending on the big stages a year ago, he could be poised for another breakthrough.