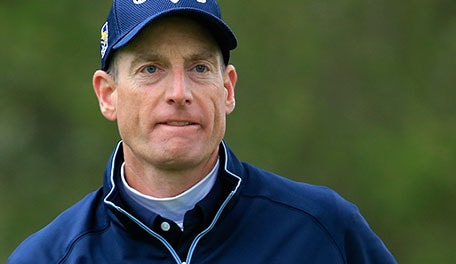 The 38th event of the wraparound season is upon us, as the PGA Tour heads to Ontario for the RBC Canadian Open. A field of 156 will tackle the Glen Abbey Golf Club, which last hosted the event in 2013.

Tim Clark won this event a year ago at Royal Montreal by one shot over Jim Furyk. Here are 10 players to watch in Canada:

1. Jim Furyk: The veteran has a sensational record at this event, with wins in 2006 and 2007 coupled with last year's runner-up and a T-9 finish at Glen Abbey in 2013. Furyk snapped out of his winless drought earlier this year at Harbour Town and ranks among the top 15 on Tour this season in fairways hit, GIR percentage and total strokes gained.

2. Brooks Koepka: Koepka announced his presence to the Tour with his win in Phoenix, and after battling through a rib injury he is again showing great form. He played his final 36 holes at St. Andrews without a bogey en route to a T-10 finish, his fourth top-20 finish in his last five PGA Tour strats. Koepka is ninth this season in both driving distance and strokes gained putting, a potent combination.

3. Bubba Watson: Watson is making just his second appearance in Canada since 2009, but he did finish T-21 at Glen Abbey two years ago and already has two wins under his belt this season. Watson has missed the cut in each of the last two majors, but those are his only missed cuts this season to go with eight top-25 finishes.

4. Jason Day: The Aussie has a quick turnaround after coming up one shot short at St. Andrews. Day hasn't played this event since 2009, and his prior two trips to Canada failed to yield top-40 finishes. He has the game to contend on any course, but questions persist about an emotional hangover following another near-miss on a major stage.

5. Matt Kuchar: Kuchar has been close each of the last two years in Canada, finishing T-2 in 2013 and T-4 last year. Kuchar is traditionally one of the Tour's most consistent players and finished second to Rickie Fowler at the Scottish Open two weeks ago. He'll look to get back on track this week after just one top-25 finish in his last six PGA Tour starts.

6. Luke Donald: The Englishman appears to be on the comeback trail. He had to earn spots the hard way in each of the past two majors, but Donald did just that and now has strung together three straight top-15 finishes after his T-12 result at St. Andrews. Donald had three straight top-25s in Canada from 2009-11, including a T-24 finish at Glen Abbey in 2009.

7. Scott Piercy: Piercy won this event at Hamilton in 2012 and he returns to Canada after another victory, this time at the inaugural Barbasol Championship. Piercy also finished second at the Sony Open and contended at the Shell Houston Open amid a successful season that has seen him return from an elbow injury.

8. J.B. Holmes: Holmes has cooled somewhat since his torrid spring, but he still remains a pre-tournament favorite at nearly any venue. Holmes has seven top-25 finishes in 18 starts this season, highlighted by his playoff win in Houston, and he ranks eighth this season in birdie average. Each of his two tournament appearances netted top-20 finishes, including a T-16 finish in 2009 at Glen Abbey.

9. Tony Finau: The rookie has been impressive this season, with a missed cut at the Deere ending a run of seven straight top-25 finishes. Finau will look to get back on track this week in his tournament debut, and he ranks 15th this season in birdie average and 22nd in scoring average.

10. William McGirt: Regardless of venue, Canada seems to bring the best out of McGirt. He was a runner-up at Hamilton in 2012, matched that result the following year at Glen Abbey and finished T-25 last year at Royal Montreal. McGirt has been lurking in the middle of the pack for much of the summer, with five of his past seven starts netting finishes between T-25 and T-41.