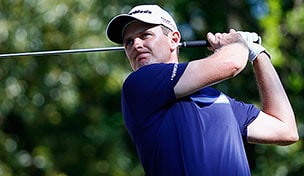 This week marks the 19th event of the 2013-14 PGA Tour season, as the Florida swing concludes in Orlando with the Arnold Palmer Invitational. A field of 132 players will tackle Bay Hill, where lush rough and difficult greens will test even the game's best.

Tiger Woods has won this event each of the past two years, but withdrew late Tuesday afternoon because of a nagging back injury. Here are 10 players to watch this week in central Florida:

1. Justin Rose: After battling shoulder tendinitis, Rose finally got a solid start under his belt last week, finishing T-8 in Tampa. The Englishman was a runner-up here a year ago and has cracked the top 15 each of the last three years, including a T-3 result in 2012. He certainly feels comfortable at Bay Hill, and last week showed he may once again feel comfortable with his swing.

2. Bubba Watson: The lefty has been one of the hottest players over the last six weeks, sandwiching a pair of runner-up finishes around his win at Riviera. Watson has three straight top-25 finishes at Bay Hill, a stretch that includes a tie for fourth in 2012 and a T-14 result last year, when he rebounded from an opening 74.

3. Adam Scott: The Aussie has opened the new year with four straight top-25 finishes, picking up right where he left off following a breakthrough 2013 campaign. While Scott has played in Orlando just once since 2007 - missing the cut in 2009 - he remains one of the more consistent players on Tour, and should be able to notch another high finish as he completes preparation for his Masters title defense.

4. Patrick Reed: The 23-year-old talked the talk following his win at Doral, but he's also backed up the self-promotion with stellar play since August. Reed has three wins in his last 14 starts, and each of his seven starts in 2014 have yielded a top-25 finish. He missed the cut last year in his first Bay Hill appearance, but Reed clearly is not the same player he was 12 months ago. Imbued with confidence, expect another high finish this week.

5. Graeme McDowell: The Ulsterman calls Orlando home now, and he's twice been a runner-up at this event (2005, 2012). McDowell's effort here two years ago included a second-round 63, and his recent form indicates a similarly low round may be in the cards this week. He has three top-10 finishes already this season, including a tie for ninth amid difficult conditions two weeks ago at Doral.

6. Kevin Na: Slow play issues aside, Na has been playing some stellar golf since returning from injury in October. Following his runner-up showing in Tampa, Na has four top-10 finishes this season, including three since January. He also has some fond memories of Bay Hill, having tied for second in 2010 and tied for fourth in 2012, his last appearance in this event.

7. Henrik Stenson: The Swede has struggled to get his game on track this year, but his recent form at Bay Hill is a positive. Stenson tied for 15th here in 2012, then followed with a T-8 finish last year after breaking par in each of his four rounds. He will look to capitalize on a strong effort his last time out, when he carded a final-round 69 to make a late run up the leaderboard two weeks ago at Doral.

8. Zach Johnson: Johnson has been a model of consistency since making his first start at Bay Hill in 2004, notching a trio of top-10 finishes while finishing outside the top 50 only twice in 10 career appearances. He's cooled somewhat since his torrid start to 2014, but he remains a threat on a golf course where his accuracy from 150 yards and in has clearly paid dividends over the years.

9. Will MacKenzie: His might not have been a familiar name to start the year, but fantasy gamers are well-served to learn it at this point. MacKenzie now has three top-10 finishes in his last five starts, including a T-4 last week at Innisbrook when he held a share of the lead at one point Sunday afternoon. He hasn't played Bay Hill since missing the cut in 2009, but he remains one of the hottest players teeing it up this week.

10. Keegan Bradley: Bradley still hasn't finished higher than 10th this season, but he has had plenty of close calls: six of his nine starts during 2013-14 have resulted in top-20 finishes, most recently a T-12 at the Honda Classic earlier this month. Bradley snagged a share of third place here last year, going 69-66 across the middle two rounds.