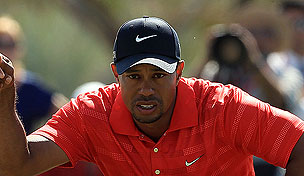 The PGA Tour enjoys a trip to America's West Coast golf cathedral this week, as the AT&T Pebble Beach National Pro-Am takes the stage on the Monterey. Tiger Woods headlines the field of professionals, teaming up with a host of amateur partners as they play a three-course lineup before ending the tournament at Pebble Beach Golf Links.

An ocean away is the second event in our Fantasy Challenge this week. Rory McIlroy leads the field as Robert Rock tries to make it consecutive wins in the United Arab Emirates. Click here to view our power rankings for the third event of the Middle East swing.

1. Tiger Woods: Woods began his season with a T-3 finish at the Abu Dhabi HSBC Championship. A final round slouch left him without a trophy, but his record at Pebble - including a T-4 in his 2010 U.S. Open bid - should give him an edge.

2. D.A. Points: The defending champion here is off to a hot start in 2012, beginning the year with a pair of top-10 finishes. Points teams again with Bill Murray, who clearly has a good influence on him.

3. Bryce Molder: Finally equipped with a PGA Tour win, Molder has been in the top ten in each of the last two years at Pebble Beach.

4. Spencer Levin: If Kyle Stanley can do it, so can Spencer Levin. Phoenix was a brutal lesson, but Levin can learn quickly at Pebble. He was fourth here last year and won the 2004 California State Amateur at Pebble Beach.

5. Dustin Johnson: A two-time champion in this event, Johnson clearly enjoys golf on the edge of the Pacific. An inconsistent start to the year, hampered in part by a nagging injury, is a cause for concern.

6. Hunter Mahan: Starting the year with a T-6 at Torrey Pines, discount what happened in the sand-swept Qatar Masters. Runner-up here last year, Mahan should be a good pick if he's over jet lag.

7. Martin Laird: The Scot has two top-15 finishes in three events this year, including a second-place finish in the opener at Kapalua. He ranks seventh on the money list.

8. Phil Mickelson: It's not saying much, but Phil had his best finish of the year (T-26) at Phoenix last week. He's won at Pebble three times and has been in the top ten in each of the last two years.

9. Jeff Maggert: Maggert is a sleeper this week, having the sixth-best record against the field average in 2012. He was runner-up here in 2004, so he has shown the capacity to perform at Pebble.

10. Bob Estes: Estes is sneaky good here, notching top-10 finishes in 2009 and '10. He's under pressure to earn money to score better status through a major medical exemption, which could be a motivator.

You can watch complete coverage of the AT&T Pebble Beach National Pro-Am Thursday-Friday live on Golf Channel from 3PM-6PM ET.