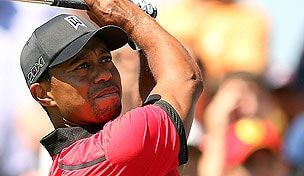 This week, the FedEx Cup Playoffs begin their second leg as TPC Boston hosts the Deutsche Bank Championship. The top 100 players remaining in the FedEx Cup race will need to remain aggressive on a course expected to yield low scores, with only the top 70 players advancing to next month's BMW Championship.

Rory McIlroy returns to defend the title he won by one shot in a shootout last year over Louis Oosthuizen. Here are 10 players to watch this week in New England:

1. Adam Scott: Fresh off his win in New Jersey, the new world No. 2 heads to a course where he has finished inside the top eight each of the last three years. The Aussie won the inaugural edition of this event in 2003 and has broken 70 in 10 of his last 12 competitive rounds at TPC Boston.

2. Tiger Woods: Assuming his back is healthy enough to let him play, Woods will likely be a force this week in Norton. A winner here in 2006, Woods was also co-runner-up in both 2004 and 2007 and has finished T-11 or better in each of his last four starts in this event. Coming off his tie for second at Liberty National, there's reason to think that trend will continue should his body hold up for 72 holes.

3. Justin Rose: Rose's tie for second last week was his best result since his U.S. Open triumph in June. The Englishman now heads to TPC Boston ranked second on Tour in total driving and third in scoring average, appearing poised to break out of a recent drought in this event that dates back to his tie for fourth in 2006.

4. Rory McIlroy: Though his 2013 season has not gone according to plan, McIlroy demonstrated last year that TPC Boston is a venue upon which he can thrive. The Ulsterman backed up his T-8 finish at Oak Hill with a tie for 19th last week and has begun to demonstrate some consistency, having carded 12 straight rounds of 72 or better since missing the cut at the British Open.

5. Brandt Snedeker: The reigning FedEx Cup champ missed the cut in New Jersey but clearly feels comfortable at TPC Boston, with three straight top-six finishes in this event. Arguably the best putter on Tour, Snedeker should remain on the short list of potential favorites any time a venue requires birdies in bunches, as is the case this week in Massachusetts.

6. Phil Mickelson: Though his Sunday rally at Liberty National fell just short, Mickelson's closing 65 gives him ample momentum heading into this week's event. The reigning Open champion leads the Tour in birdie average and has considerable success at TPC Boston, with top-10 finishes in each of the past two years to go along with his win in 2007.

7. Zach Johnson: Having skipped last week's event, Johnson will look to continue a streak of five straight top-10 finishes that dates back to the John Deere Classic last month. The former Masters champ has made a considerable late-season surge, one that he will need to maintain in order to hold on to his current position in the Presidents Cup standings (10th) during the final week of qualification.

8. Henrik Stenson: Though he faded over the weekend after an opening 65 at Liberty National, Stenson remains one of the hottest golfers on Tour, with four top-three finishes in his last five worldwide starts. The Swede currently leads the Tour in GIR percentage while ranking third in total driving and fourth in scoring average.

9. Jim Furyk: Furyk's tie for sixth in New Jersey was his fourth straight top-10 finish, a streak that includes his near-miss at the PGA Championship. With eyes on making the Presidents Cup roster, Furyk tees it up this week on a course where he has finished T-13 or better four of the last five years.

10. Jordan Spieth: Though he's 26th in the U.S. Presidents Cup standings, Spieth will likely look to make one last positive impression this week on Fred Couples in hopes of a captain's pick. After following up his runner-up in Greensboro with a tie for 19th at The Barclays, it's a safe bet that the Texan will extend his impressive rookie campaign with another high finish.