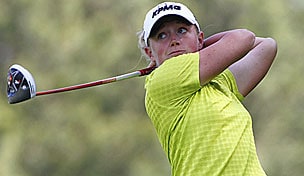 This week, the LPGA Tour returns to Europe as the Evian Championship is contested as a major for the first time. The fifth and final major of 2013 will be played in Evian-les-Bains, France, where the world's best will encounter a course that has been renovated since last year's event.

Inbee Park returns to defend the title she won a year ago over Stacy Lewis and Karrie Webb. Here are 10 players you should keep an eye on in France:

1. Stacy Lewis: A runner-up in France each of the last two years, Lewis returns eyeing a victory. The last time an LPGA major was held in Europe, the 28-year-old was seen leaving St. Andrews with trophy in hand.

2. Inbee Park: Though she has cooled somewhat in recent weeks, Park is still in position this week to become the first player ever to win four professional majors within the same calendar year. As the defending champion, it's clear she knows her way around this venue.

3. Suzann Pettersen: The Norwegian heads to France on the heels of her win at the Safeway Classic, and Pettersen has been inside the top 10 twice in the last three years in this event. Perhaps still buoyed by the European team's win at the Solheim Cup, she appears poised for another big week this week.

4. Paula Creamer: A winner here in 2005, Creamer has recorded a top-10 finish in five of her eight career Evian starts, including a tie for ninth last year. Though she remains winless on the LPGA since the 2010 U.S. Women's Open, the American clearly seems to feel comfortable along the fairways in Evians-les-Bains.

5. Karrie Webb: The veteran won here in 2006 and was a co-runner-up just a year ago. Webb has contended at two of the season's first four majors, including a tie for fifth at the Kraft Nabisco Championship, and notched her first win in more than two years at the ShopRite LPGA Classic in June.

6. Cristie Kerr: Kerr has finished outside the top 25 at this event just once since 2008 and has five career top-10 finishes to her credit in France. She has been inside the top 20 at each of the first four majors this year and will be eager for an opportunity to bounce back from the disappointment of last month's Solheim Cup result.

7. I.K. Kim: A runner-up at this year's U.S. Women's Open, Kim has five other top-five finishes to her credit this year on the LPGA. The South Korean has also finished T-11 or better three of the last five years in France, including a tie for third in 2011.

8. Ai Miyazato: The Japanese sensation has won this event twice in the last four years (2009, 2011) and has finished outside the top 25 just once since 2006. Though Miyazato has had a rather underwhelming season on the LPGA Tour this year, there's reason to think she'll be able to turn it around on a course where she has experienced great success in recent memory.

9. Anna Nordqvist: One of the heroes of Europe's Solheim Cup rout last month, Nordqvist has made four career starts in this event and has finished inside the top 20 all four times, including a seventh-place showing last year. The Swede also has four top-20 finishes in her last five LPGA starts entering this week.

10. Na Yeon Choi: Choi has been inside the top 20 in eight of her last nine LPGA starts, a stretch that dates back to May. The former U.S. Open champion was twice a runner-up in this event and notched three straight top-10 finishes in France from 2008-2010.