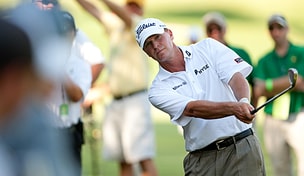 Here are GolfChannel.com’s Power Rankings, the top 10 favorites for the John Deere Classic:

1. Steve Stricker: He's won once on Tour this season. He's the highest-ranked player in the field. He's the two-time defending champion. A unanimous No. 1 pick by the panelists this week.

2. Zach Johnson: It's as close to a home gig as it gets for the Iowan. He hasn't had a great deal of success in nine appearances at this event, but he was runner-up in 2009. He also owns a 67.83 scoring average on Sunday in his last six Tour starts.

3. Jason Day: It's his first start since a runner-up showing at the U.S. Open. Dating back to his T-2 at the Masters, the Aussie has five top-10s in six events.

4. David Toms: This is just his third start in Moline, Ill., since 2000, and he didn't do anything of note in the previous two. However, Toms won at Colonial and is playing some of the best golf of his distinguished career.

5. Jonathan Byrd: The 2007 John Deere champion is oft overlooked and oft in contention. He won the season-opening event at Kapalua and lost in a playoff at the Wells Fargo Championship.

6. Steve Marino: The American tops many lists as Best Player Without a Tour Win. He has never finished better than T-41 in two John Deere starts, but it seems a matter of time before he finally breaks through.

7. Robert Garrigus: A week removed from his marijuana revelations, Garrigus looks to let his clubs to the talking this week.

8. Louis Oosthuizen: Instead of competing at Castle Stuart Golf Links, the South African has decided to tune up for his Open Championship title defense at TPC Deere Run. We'll see if the strategy works this week and next.

9. Scott Verplank: Falls in the Oldie But Goodie department. Has played this event only once since 2002, but in eight career starts has finished outside the top 15 only once.