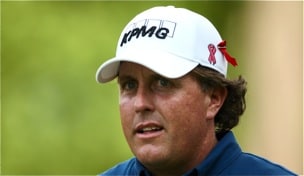 Here are GolfChannel.com’s Power Rankings, the top 10 favorites for the U.S. Open:

1. Phil Mickelson: There's little doubt the biggest trophy missing from Lefty's mantle comes from the U.S. Open. Five runner-ups say Mickelson wants this one badly and that this championship suits his game.

2. Luke Donald: The world No. 1 has not finished out of the top 10 in his last eight Tour starts and he's coming off of a big European Tour victory a few weeks ago. Need we say more?

3. Lee Westwood: Seems to be in the picture in nearly every major championship during recent years and his T-11 last week at Memphis says he's on form. His solid driving will bode well at Congressional also, which is expected to play long this week.

4. Steve Stricker: An impressive win at Jack's place two weeks ago, Stricker's finished no worse than T-13 in his last five Tour starts. This 40something is peaking right now and will be a good bet to contend this week.

5. Matt Kuchar: Kuch finished runner-up to Stricker at the Memorial in his last start and his consistency this year continues to amaze. He's primed to win, perhaps in a major way at Congressional this week.

6. Dustin Johnson: Remember Pebble Beach last year? DJ surely does. Caddie situation and game back under control, Johnson looks to avenge his final-round collapse at the Open a year ago.

7. Nick Watney: Watney's game has matured this year – with a win and seven top-10s – and his calm demeanor sets up perfectly to withstand the rigors of a U.S. Open.

8. Martin Kaymer: The 'Germanator' reached the peak of the golfing world earlier this season and it's hard to debate the 2010 PGA champ earned the right to be called the world's best. But he's been shaky at times in recent months, so it will be interesting to see which side of Kaymer shows up.

9. K.J. Choi: The Players champ showed he has the skill to win on a tough golf course and the courage to do it on a big stage. He also won the 2007 AT&T National at Congressional.

10. Rory McIlroy: Seems a few players on this list have had major championship collapses on their resumes and McIlroy is the most recent to wear this shroud. Should be interesting to see how he bounces back from the Masters.