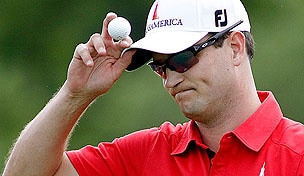 This week marks the fifth week of the PGA Tour's new 2013-14 wraparound season, as the Tour returns to the U.S. after two weeks in Asia. Sea Island Club's Seaside Course plays host this week to The McGladrey Classic, the penultimate official event of the 2013 calendar year.

Tommy Gainey returns to defend the title he won last year by one stroke over David Toms. Here are 10 players to watch this week along the Georgia coastline:

1. Zach Johnson: A resident of nearby St. Simons Island, Johnson finished the 2013 season as one of the hottest golfers on Tour, a stretch that he capped with a win at the BMW Championship in September. Dating back to last season, Johnson has seven top-10 finishes in his last nine starts overall and should benefit from the friendly confines this week at Sea Island.

2. Webb Simpson: A winner his last time out at the Shriners Hospitals for Children Open, Simpson is clearly carrying some momentum into this week's event in Georgia. He's also familiar with Sea Island, having lost to Ben Crane in a playoff here in 2011 in his most recent McGladrey appearance.

3. Matt Kuchar: One of many players in this week's field with ties to the Peach State, and at No. 8 is the highest-ranked player in this week's field. He's notched a pair of top-25 finishes in his previous two McGladrey appearances and has shot par or better in each of his eight prior competitive rounds at Sea Island.

4. Brendon de Jonge: The Zimbabwean remains on the short list of most talented players without a PGA Tour win, though he nearly got one here a year ago when he tied for fourth. A course like Sea Island that demands tee-to-green accuracy while yielding a high number of birdies will usually be in de Jonge's wheelhouse.

6. Boo Weekley: Weekley is making the long trip from China to Georgia this week, having tied for 11th at the WGC-HSBC Champions. The veteran finished the 2013 season ranked sixth on Tour in GIR percentage and seventh in total driving, two trends that should bode well this week on a course where Weekley tied for 27th a year ago.

7. Jeff Overton: Overton tied for sixth here in 2011 and in two career appearances has shot in the 60s in seven of eight competitive rounds. Already with three starts under his belt in 2013-14, the former Hoosier has finished T-16 or better each time he's teed it up this season, including a T-9 in Las Vegas after opening with a 63.

8. John Peterson: Though Peterson has cooled since his torrid run through the Web.com Tour Finals, he now returns to a course where he finished second during the 2011 SEC Championship. A former NCAA champion while at LSU, Peterson tied for 21st at the Frys.com Open and has the ability to go low on nearly any PGA Tour venue.

9. Luke Guthrie: Guthrie is currently riding a hot hand, having parlayed his tie for fifth in Las Vegas into a fourth-place finish at the BMW Masters in China two weeks ago. Now back in the States, the former University of Illinois product will look to keep up his momentum, having shot 71 or better in each of his first eight rounds to start the 2013-14 PGA Tour season.

10. Harris English: A former standout at the University of Georgia, English will certainly have some crowd support this week at Sea Island and has already shown the ability to win on the PGA Tour. The 24-year-old tied for seventh in his most recent start at the CIMB Classic and tied for 15th at McGladrey a year ago.