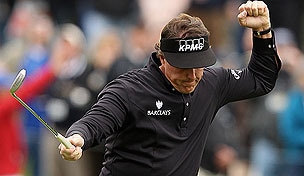 Getty Images
PONTE VEDRA BEACH, FL - MAY 09: Luke Donald of England plays into the 18th green during the third round of THE PLAYERS Championship on THE PLAYERS Stadium Course at TPC Sawgrass on May 9, 2009 in Ponte Vedra Beach, Florida. (Photo by Richard Heathcote/Getty Images)  -

The PGA Tour heads to Hogan's Alley this week for the Northern Trust Open at Riviera. The Los Angeles stop boasts a strong, international field, as well as a couple of collegiate amateurs who will likely return for the NCAA Championship later this year.

After taking a look at the power rankings for the week, be sure to tweet your picks using the hashtag #GCFantasy and follow me @RyanBallengeeGC. Also be sure to join the Golf Channel Fantasy Challenge to test yourself against our panel of experts, including defending champion Win McMurry - who is very lucky to have taken the lead against me.

1. Phil Mickelson: The Pebble champion suddenly has taken his promising practice inside the ropes. A two-time winner in '08 and '09, Mickelson was runner-up here in '07.

2. Luke Donald: Making his 2012 PGA Tour debut, Donald had his worst ever non-major finish on the European Tour in Abu Dhabi. He missed the cut here last year in the only major blemish on the year. With the bad start out of the way in the U.A.E., Riviera could be site to an early start for the world No. 1.

3. Aaron Baddeley: The defending champion is hot heading into Riviera. He finished fourth at Pebble Beach and has never missed a cut at the Northern Trust Open.

4. Kevin Na: Na had a chance at Riviera last year, finishing T-3. He was T-5 at Pebble and Phoenix before that. He's on the verge of a second PGA Tour win, for sure.

5. K.J. Choi: The Tank has never missed a cut at Hogan's Alley and boasts four top-10 finishes, including three in his last four starts.

6. Jason Day: The world No. 7 got his year started right with a runner-up finish in Qatar. Though he has not won on the PGA Tour since the Nelson breakthrough, he has been a top-10 machine.

7. Spencer Levin: He was T-12 here last year and had a very nice bounce back at Pebble Beach, finishing T-9. He continues to outplay his peers and should make a paycheck this week.

8. Adam Scott: The unofficial winner in 2005, Scott is kicking off his season here this week. Rust is certainly a concern, as is his missed cut in his last Riviera start in '09.

10. John Rollins: Rollins is in the top 10 against the field average this season, and does boast four top-15 Riviera finishes. He is hit or miss here, however, with four missed cuts.