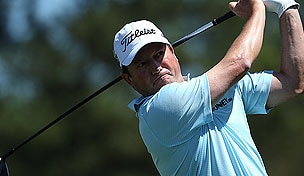 This week marks the sixth event of the 2013-14 PGA Tour season, with players heading south of the border to Mexico for the OHL Classic at Mayakoba. El Camaleon plays host to the final official event of the 2013 calendar year, as a full field of participants will look to garner some momentum heading into the new year.

John Huh is back to defend the title that he won last year in a playoff over Robert Allenby. Here are 10 players to this week along the Riviera Maya:

1. Tim Clark: The South African is playing in this event for the first time, but enters with the momentum of a Sunday 62 at McGladrey. His ball-striking and accurate approaches should bode well on El Camaleon.

2. Brian Gay: A winner here in 2008, Gay also tied for fifth in 2011 and heads to Mexico on the heels of a top-five finish at Sea Island. If the veteran can shake off the jet lag and fatigure from four straight events in four different countries, he's a likely contender.

3. Kevin Stadler: Though he faded Sunday on the Seaside Course, Stadler played his way into the final group at the McGladrey Classic. He's also played well at Mayakoba, with four top-20 finishes in six starts, including last year's tie for 16th.

4. Briny Baird: Ever so close to his first career PGA Tour win last week, Baird at least was able to satisfy his major medical extension with his sixth career runner-up. Now he heads to an event where he has had considerable success: five straight finishes of T-12 or better, including a tie for fourth in 2010 and a tie for fifth in 2011.

5. Charles Howell III: Howell quietly notched a T-27 finish at McGladrey and has now started the new season with four straight top-35 results. At No. 77 in the latest world rankings, Howell will be looking for a high finish this week to further his goals of making the fields for both The Masters and WGC-Accenture Match Play Championship. Has finished inside the top 20 each of the last three years at Mayakoba.

6. Scott Brown: A winner earlier this year in another tropical destination, Puerto Rico, Brown already has a pair of top-five finishes to his credit through four starts of the 2013-14 season. After ranking 139th in strokes gained putting for the 2013, he's already up to 13th in the category this season.

7. Ryan Moore: Though he struggled in China, Moore punched his ticket to The Masters with his win last month in Malaysia and tied for ninth in Las Vegas in his last U.S. start. One of the more accurate drivers on the PGA Tour, Moore should afford himself plenty of birdie opportunities this week in Mexico.

8. Daniel Summerhays: The 29-year-old has made the cut in each of his first four starts this season, including a tie for 10th last week in Georgia. After closing with a strong second half to his 2013 season, Summerhays has picked up right where he left off and now returns to El Camaleon, where he tied for fifth last year.

9. Harris English: A winner last year in Memphis, English has started the new season with a trio of top-40 finishes, including a T-7 in Malaysia. Each of his 12 competitive rounds this year have been 71 or better, and the former Georgia standout ranks 20th in scoring average and 25th in GIR percentage a month into the new wraparound slate.

10. Matt Every: Every tied for third in Mexico last year, just missing out on the Huh/Allenby playoff. His name also rose quickly up the McGladrey leaderboards on Sunday, though two bogeys across his final three holes relegated the 29-year-old to a tie for seventh. Still, it should provide him some momentum heading to a course where he closed last year with a 5-under 66.