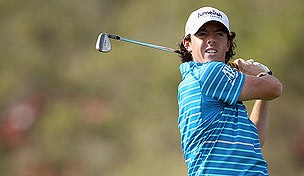 Getty Images
ST ANDREWS, SCOTLAND - SEPTEMBER 30: Manuel De Los Santos of the Dominican Republic plays his second shot to the first green during the final practice round of The Alfred Dunhill Links Championship at The Old Course on September 30, 2009 in St. Andrews, Scotland. (Photo by David Cannon/Getty Images)  -

While the PGA Tour is at the AT&T Pebble Beach National Pro-Am (click here for those power rankings), the Omega Dubai Desert Classic is on the European Tour docket. The power rankings for this third event of the Middle East swing are below.

1. Rory McIlroy: The world No. 2 is an automatic pick this week. Since last August, McIlroy has been playing the best golf in the world. He won in Dubai in 2009 and has been in the top 10 since.

2. Alvaro Quiros: Quiros is defending champion at Emirates GC and was sixth the year prior. Abu Dhabi was an aberration, so stick with the Spaniard's excellent desert record.

3. Martin Kaymer: He finished T-9 last week in Qatar and has an excellent Dubai track record, with three top-4 finishes. Don't expect another Emirates let down like in Abu Dhabi.

4. Lee Westwood: He was the runner-up here in 2010 and was in the top 15 last year. Off to a little bit of a sluggish start by Westwood standards, he still has a pair of top-20 finishes to kick off the season.

5. Robert Rock: The winner in Abu Dhabi is back for the Emirate Double. He has finished in the top 20 in each of the last two seasons, so he can bring his form across the country.

6. Thomas Bjorn: Three top-25 finishes to start the year show the 2001 Dubai Desert Classic champion could be poised for another run.

7. Miguel Angel Jimenez: The Mechanic was a winner here two years ago, and the age-defying Spaniard has only finished outside of the top 10 here twice since 2005.

8. Chris Wood: He was in the top 20 last week in Qatar and has been anchored there in the Dubai Desert Classic for the last two seasons.

9. Michael Hoey: A rising Ulsterman - and one of seemingly few without a major - Hoey had his best finish of the season (T-12) in Qatar last week. He was T-15 in Dubai last year.

10. Jose Maria Olazabal: It might seem crazy, but the Ryder Cup captain is in form to start '12. He has two top-12 finishes to begin the year, and was T-15 last year in Dubai.

You can watch complete coverage of the Omega Dubai Desert Classic Thursday-Friday on Golf Channel from 4:30AM-8:30AM ET and Saturday-Sunday from 4AM-8AM ET.