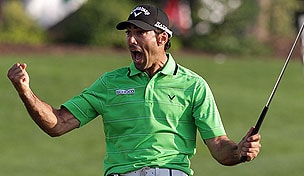 Getty Images
SCOTTSDALE, AZ - FEBRUARY 26: Braxton Marquez watches his tee shot on the ninth hole during the second round of the Waste Management Phoenix Open at TPC Scottsdale on February 26, 2010 in Scottsdale, Arizona. (Photo by Hunter Martin/Getty Images)  -

While the PGA Tour is at the Waste Management Phoenix Open (click here for power rankings), the Commercialbank Qatar Masters is on the European Tour docket. The power rankings for this second event of the Middle East swing are below.

1. Alvaro Quiros: The Spaniard has been runner-up in Qatar each of the last two years. The man loves desert golf, including winning in Dubai last year.

2. Thomas Bjorn: The defending champion in Qatar managed to finish T-3 last week in Abu Dhabi. Bjorn should continue his desert form as he jumps fully into the new season.

3. Sergio Garcia: Finishing 12th last weekend in Abu Dhabi, Garcia remains in good form heading into a place where he has finished in the top 10 in three of his five starts.

4. Retief Goosen: A win in Qatar in 2007 was his last European Tour victory. Goosen lost in the Volvo Golf Champions playoff to end a great South African run; he is now moving to the desert, which works for him, too.

5. Robert Karlsson: He was the 2010 champion and has three other top-6 finishes in this event. Seems a likely contender.

6. Lee Westwood: The world No. 3 has finished in the top 5 in two of his last four starts in Qatar. He'll be hungry to make up ground on No. 2 Rory McIlroy.

7. Graeme McDowell: Off to a hot start again this year, McDowell has finished in the top 20 in his last three Qatar starts.

8. Tom Lewis: The youngster has desert experience in his amateur days, saying he enjoys the region. Here's his chance to continue to impress.

9. Martin Kaymer: After shockingly missing the cut in Abu Dhabi last week, Kaymer comes to a place where he has been hovering around 30th place for the last three years.

10. Hunter Mahan: Passing on Phoenix for this event, Mahan should perform well in Qatar - a somewhat similar environment to TPC Scottsdale, where he has won in the past.

You can watch complete coverage of the CommercialBank Qatar Masters Thursday-Friday on Golf Channel from 9AM-1PM ET and Saturday-Sunday from 8:30AM-12:30PM ET.