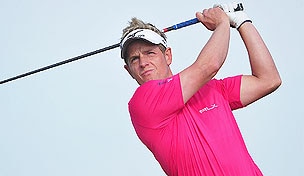 Getty Images
PITTSFORD, NY - JUNE 26: Sandra Gal of Germany during the second round of the Wegmans LPGA at Locust Hill Country Club held on June 26, 2009 in Pittsford, NY. (Photo by Michael Cohen/Getty Images)  -

Here are GolfChannel.com’s Power Rankings, the top 10 favorites for the RBC Canadian Open:

1. Luke Donald: Third at this event last year and after a lukewarm U.S. Open (T-45) and missed cut at the Open Championship, the world No. 1 – whose game is built on consistency – has some motivation to play well.

2. Matt Kuchar: Has eight top-8s in 16 starts this year, which is why his way-off-the-mark performance – an 11-over 36-hole total – at Royal St. George's was such a surprise. Kooch was playing well preceding the trip overseas, however, so now back on an American-style course – in Canada – look for a speedy recovery.

3. Anthony Kim: Rumored signs of recent progress confirmed by his strong T-5 showing in England, maybe AK's back. Time will of course tell, but he's a player who thrives off of motivation and momentum, so look for Kim to put the pedal to the metal this week.

4. Rickie Fowler: Impressed many at Royal St. George's after sustaining some of the worst weather of the top finishers en route to his T-5 finish – his best in a major yet – so don't be surprised if Fowler holds a Tour trophy sometime soon.

5. Brandt Snedeker: Already got the job done at The Heritage this year – his second Tour win – and he has two top-7 finishes at this storied event in his still-young career. Currently 20th in the All-Around ranking, Sneds should handle the event's new home in Vancouver just fine.

6. Jim Furyk: The 2006 and 2007 RBC Canadian Open champ has been struggling of late. Four missed cuts in his last five events come as an unexplainable oddity for the reigning FedEx Cup champion. Is this the week he breaks his slump?

7. Hunter Mahan: Seven top-10s this year show Mahan's game is coming of age. But missed cuts last week at the Open Championship and last month at the U.S. Open, filled by mediocre finishes at the Travelers and AT&T (T-43, T-30), also show he's not on form at the moment.

8. Carl Pettersson: The defending champ shot a third-round 60 en route to his one-stroke win over Dean Wilson, but with a new course comes new rules – and only a sentimental vote for the Swede, considering his mediocre 62nd-place standing in the FedEx Cup this year.

9. Paul Casey: Considering the Englishman made over $3.6 million on Tour last year, 2011 has been an anomaly, with no top-10s in just nine starts and a mere $378,575 to his credit. Still, Casey got the nod from our panel this week because, like Mahan, he's a marquee name and sooner or later the big names play well.

10. Charl Schwartzel: Considering his 1st, T-9 and T-16 finishes at the majors in 2011, it's a surprise The Masters champ didn't draw more respect from the panelists. But, has respect of who should play well accounted for anything this year?