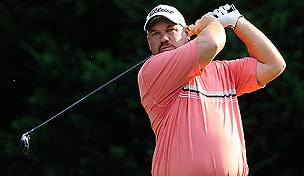 Getty Images
LA QUINTA, CA - JANUARY 22: Gary Woodland celebrates after making an eagle putt on the sixth hole during the fourth round of the Bob Hope Classic at the Palmer Private course at PGA West on January 22, 2011 in La Quinta, California. (Photo by Jeff Gross/Getty Images)  -

This week marks the second week of the PGA Tour's new 2013-14 wraparound season, as a field of 132 players head to Las Vegas for the Shriners Hospitals for Children Open. TPC Summerlin plays host to the event, where the winning score routinely exceeds 20 under par.

Ryan Moore returns to defend the title he won last year by one shot over Brendon De Jonge. Here are 10 players to watch this week in Las Vegas:

1. Brendon de Jonge: This event has a history of crowning first-time winners (Tiger Woods and Jim Furyk among them), so there may be no better place for the Zimbabwean to break through following his strong performance at the Presidents Cup. His runner-up finish last year should provide ample momentum for de Jonge, who led the Tour in total birdies last season.

2. Zach Johnson: The highest-ranked player in this week's field, Johnson is just four weeks removed from his triumph at the BMW Championship. The veteran is making just his second start in Las Vegas, though he managed a T-10 result in his debut in 2008. Since the John Deere Classic, Johnson has seven top-10 finishes in his last eight stroke-play starts.

3. Hideki Matsuyama: Matsuyama was among the names to watch last week at CordeValle and proved why, finishing in a tie for third to net his best career PGA Tour finish. The Japanese sensation has now made seven Tour starts since the U.S. Open, finishing no worse than T-21 each time while turning in a trio of top-10 finishes.

4. Webb Simpson: The former U.S. Open champ is making his first start in Vegas since 2010, when he tied for fourth. Simpson enters on the heels of his fourth-place showing at East Lake and, like Johnson, was a part of the victorious squad at the Presidents Cup earlier this month. Finished last season 13th on Tour in scoring average and 19th in birdie average.

5. Martin Laird: A winner here in 2009, Laird followed that up with a tie for second in 2010 and clearly feels comfortable at TPC Summerlin. Though he struggled somewhat in the wake of his win at the Valero Texas Open in April, the Scot has carded 67 or lower in seven of his last 12 competitive rounds in this event.

6. Graham DeLaet: The Canadian is playing here for the first time since 2010, when he tied for 18th. Despite coming up short at Muirfield Village, DeLaet shined throughout the FedEx Cup Playoffs and is among the players to watch for a breakthrough win this season – one that could come as quickly as this week.

7. Ryan Moore: The event's defending champion, Moore also tied for seventh in 2009 and finished T-16 in 2005. He quietly had a solid 2013 season, one that included seven top-25 finishes in 22 starts, and tied for 11th at the BMW Championship in his most recent action. A resident of Las Vegas, Moore will likely benefit from a hometown rooting section this week at TPC Summerlin.

8. Scott Piercy: Like Moore, Piercy calls Las Vegas home and should receive some extra support this week as a result. One of the longest hitters on Tour, Piercy notched a trio of top-five finishes last season, including a tie for fifth at the PGA Championship, and has finished inside the top 15 in this event three of the last four years.

9. George McNeill: A winner here in 2007, McNeill also tied for second in 2009 and finished T-14 in 2010. The veteran is clearly comfortable playing desert golf and enters with the momentum of a tie for seventh at CordeValle last week, where McNeill rose up the leaderboard with a Saturday 62.

10. Spencer Levin: Having missed much of 2013 due to injury, Levin opened his 2013-14 season with a tie for 12th last week at the Frys.com Open, his first PGA Tour start in more than a year. If healthy, the 29-year-old could factor this week in Las Vegas, where he finished T-4 in 2010 and T-5 in 2011, breaking 70 in each of his eight competitive rounds across that two-year span.