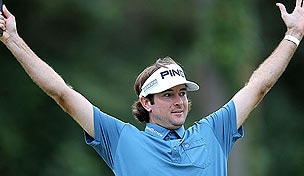 The PGA Tour season kicks off this week in Kapalua with the Hyundai Tournament of Champions. The event is contested Friday to Monday and will crown the season's first winner from a 28-man field of 2011’s PGA Tour victors.

Each week, GolfChannel.com will present top-10 players to watch for at that week’s PGA Tour event. Of course, we want to hear from you as well. Follow me @RyanBallengeeGC on Twitter, or use the hashtag #GCFantasy to share your picks. And don’t forget to join the Golf Channel Fantasy Challenge today to play against our experts, your friends and fellow golf lovers.

2. Webb Simpson: Simpson was tremendous in '11 from 20-25 feet, ranking 18th on Tour. That kind of mid-range accuracy is imperative this week.

3. David Toms: Toms was sixth in greens in regulation in '11 and T-5 in proximity to the hole. On Kapalua's massive greens, the combination will help Toms overcome a lack of distance.

4. Keegan Bradley: The PGA champion earned his first PGA Tour title last season at the Nelson – an event plagued with high winds. Bradley should fare well if the breeze picks up in Hawaii.

5. Nick Watney: Twice a winner last year, Watney thrived at The Lakes in the Aussie Open. His T-4 there on a course requiring precision and imagination is encouraging for Kapalua, where he finished T-5 in 2008.

6. Bubba Watson: Two things stand out about Bubba heading into the season-opener: that driver off the deck to the 18th last year and the 58 he shot last week while practicing at his home course in Scottsdale, Ariz.

7. Bill Haas: The FedEx Cup champion is expected to do big things in '12 and he can perform anywhere. His only Achilles heel is final-round scoring – 122nd on Tour last season and 121st the year prior.

8. Scott Stallings: Driving accuracy is not critical at Kapalua thanks to its generous fairways. Stallings was 153rd off the tee in 2011, but 11th in distance. That's Robert Garrigus – last year's runner-up – in a nutshell.

10. Rory Sabbatini: Sabo has recorded two runner-up finishes in the Tournament of Champions ('01 and '10) which indicates a preference for the Plantation Course.