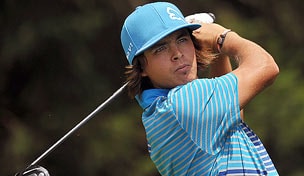 The PGA Tour moves to Arizona this week for the first time in 2012. TPC Scottsdale and its famous - or infamous - par-3 16th are the stage opposite the Super Bowl, and below are our power rankings for the Waste Management Phoenix Open.

Meanwhile, the Commercialbank Qatar Masters is taking place on the European Tour docket. Click here to view our power rankings for the second event of the Middle East swing.

1. Rickie Fowler: Fowler finished second in Phoenix in 2010, nearly winning his first PGA Tour event. Now armed with his first pro win and a T-13 to start 2012, Fowler could break out any week now.

2. Brandt Snedeker: Snedeker took advantage of a difficult situation to win at Torrey Pines, backing up his T-8 to start the year at the Humana. In five Phoenix starts, he has two top-10 finishes.

3. Mark Wilson: The defending champion in Phoenix already has a win this year, so a good finish in this setting seems likely as well.

5. Bill Haas: Off to a great start in '12, Haas finished fourth last week. He has just one Phoenix top-10, however, which is a question mark.

6. Martin Laird: Laird began the year as runner-up at Kapalua and a top-15 at the Humana Challenge has him in good form. He was T-3 here last year, just out of the Monday playoff.

7. John Rollins: Rollins was third last week at Torrey Pines,ranking T-2 in birdies made. He hasn't missed the cut in Phoenix, datingback nine consecutive starts. He should make a good check this week.

8. Gary Woodland: He has made the big switch to Butch Harmon,but Woodland's athleticism can help him on a track notorious forallowing long drives. He was T-5 last season in Phoenix.

9. J.B. Holmes: This is a great place for Holmes to feel athome. His only two Tour wins are here - in even-numbered years (2006,'08). Holmes will feel good vibes as he gets back in the zone.

10. Chris Couch: It might sound crazy, but Couch has an excellent record in Phoenix. He has finished eighth and fourth here in each of the last two years.

You can watch complete coverage of the Waste Management Phoenix Open Thursday-Friday live on Golf Channel from 4PM-7PM ET.