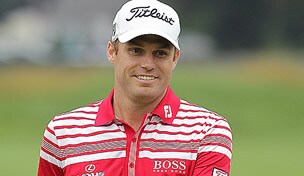 Here are GolfChannel.com’s Power Rankings, the top 10 favorites for the AT&T National:

1. Nick Watney: Watney's made over $3 million in 2011 via a win and six other top-10s, and he played well here last year, finishing tied for seventh. Our experts liked what they saw in his T-13 last week at the Travelers and a stern, par-70 test like Aronimink is right up his alley.

2. K.J. Choi: The 2007 AT&T champ has become a major player this year– or fifth major, as it may be, with his Players Championship win – and a favorite in events that require a well-rounded game.

3. Ryan Moore: A missed 4-footer on the 72nd hole at the Travelers was all that could have separated Moore from his second Tour tilt a mere shot secured the same fate last year in his solo second finish. Moore's playing well and history shows he plays well at this tournament.

4. Justin Rose: Rose comes into this week as the defending champ but he's also coming off of two straight missed cuts and lukewarm play before that since his T-11 at The Masters. Still, good memories count for a lot in golf and Rose has the skill to turn it around at any given moment.

5. Hunter Mahan: This 'Golf Boy' finished second here to the tournament host in 2009 and a second-round 63 last week in Hartford says the game is there. But he's been inconsistent of late – his MC at the U.S. Open and over par rounds to open and close the Travelers also say Mahan's a bit of a wildcard at the moment.

6. Lucas Glover: The man with a Facebook page devoted to his facial hair has lulled since his Wells Fargo win in May which says the early-season struggles of the '09 U.S. Open champ are more the norm than the exception this year. But, as evidenced by his major championship title, Glover plays difficult courses well so perhaps he'll get things back on track this week.

7. Webb Simpson: Simpson knocked on victory's door twice this year – at the Transitions Championship and Zurich Classic – but no one has yet to answer. A great all-around player (currently No. 1 on the PGA Tour's 'All-Around' ranking), a victory is sure to come soon.

8. Mark Wilson: Already a two-time winner this year on Tour, Wilson also had a pair of top-10s at both Arnie and Jack's events. And now this is Tiger's event.

9. Anthony Kim: By all accounts AK feels good about his game, but his results have yet to yield the kind of season the '08 AT&T champ is capable of. Could this be the week Kim becomes the kid of old?

10. Adam Scott: With the tournament host, Woods, sidelined still for an unknown period of time, Scott has the former world No. 1's caddie on loan. He's struggled since his T-2 at the Masters, but maybe the combo of Tiger's caddie at Tiger's tournament is enough to bring the player who copied Tiger's swing of old back into the limelight.