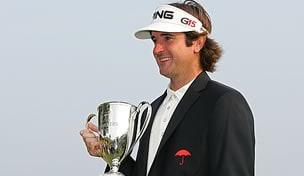 Here are GolfChannel.com’s Power Rankings, the top 10 favorites for the Travelers Championship:

1. Bubba Watson: Bubba's back where he won a year ago – the site of an emotional first win that's since led to two more. Even some lackluster play recently can't deny this Golf Boy the No. 1 spot, since good memories are sure to abound.

2. Nick Watney: Watney missed the cut at Congressional but it's hard to keep a good player down long. Seven top-10 finishes and a win this year say this matured Californian will rebound with a good week.

4. Zach Johnson: Johnson was in the mix at Congressional through 36 holes before an over-par weekend dropped him back in the pack. But he's been trending up, and his consistency garners the respect of many.

5. Brandt Snedeker: Coming off of a T-11 last week, Sneds' win at the Heritage in April proved this emotional player has come of age. That, and five top-10s this year say his game travels well.

6. David Toms: After losing the playoff at The Players then winning the next week at Colonial, Toms missed the cut in Memphis and last week at the U.S. Open. But who can blame him for having some emotional letdown? His game's still there.

7. Padraig Harrington: Harrington made news at the U.S. Open but it wasn't from his T-45 finish. He anointed Rory McIlroy as the next to challenge Jack Nicklaus' major championship record before the final round even began, which turned the heads of many. Perhaps he'll turn heads with his clubs this week, as he was tied fifth last year.

8. Bo Van Pelt: It's been a solid year for Van Pelt and he's primed to win his second Tour event soon. He also has two previous top-10s here, so the ingredients are there.

9. Vijay Singh: Still searching for the form that won him nine PGA Tour events in 2004, Singh has a pair of top-5 finishes here since 2007 and has a history of playing well in the summer heat.

10. Fredrik Jacobson: The Swede played well at the U.S. Open until a final-round 73 yielded a T-11 finish. Nevertheless, he's shown consistency in his last few starts and our experts liked his scrappy play.