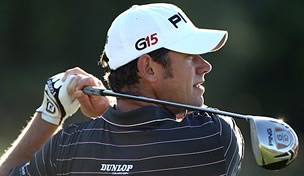 Getty Images
NORTH PLAINS, OR - AUGUST 29: Michelle Wie tees off on the 16th hole during the second round of the Safeway Classic on August 29, 2009 on the Ghost Creek course at Pumpkin Ridge in North Plains, Oregon. (Photo by Jonathan Ferrey/Getty Images)  -

1. Lee Westwood:  He is the second-ranked player in the world, he's clearly the best player in the field by miles and he's the defending champion. Good enough?

2. David Toms: If not for Westwood, Toms would be the clear-cut favorite. Playing some of the best golf of his life recently and has six top-5 finishes here, including a pair of wins.

3. Zach Johnson: Two top-12 finishes in two prior starts at the FedEx St. Jude. Hasn't been worse than T-12 in his last three events on Tour.

4. Ben Crane: Hasn't played particularly well over the last two months, but he has a solid record in this event with three top-15s.

5. Robert Karlsson: Not much of a history at this event to go off of, but a T-2 in his debut last year is good enough to put him on the short list of contenders.

6. Jonathan Byrd: Despite pedestrian results at this event, Byrd has a playoff loss and a tie for seventh in his last three Tour starts.

8. Geoff Ogilvy: Has never made the cut in four previous FedEx St. Jude starts, but at least one member of the GolfChannel.com team thinks he'll start heating up for a summer run

9. Heath Slocum: Slocum has a trio of top-10s at this tournament and usually pops up a couple of times a year near the top of a leaderboard.